Happy Hump Day! Today I'd like to welcome Lillian Francis to take her turn in the Hot Seat…

It’s a toss-up but I think I’d have to say New Adventures of Superman with Dean Cain and Terri Hatcher. I loved how the focus of the show was Clark rather than Superman. And I’m a big believer that it is Clark and his ‘humanity’ that make Superman the hero that he is. Plus Dean Cain was gorgeous (still is, even though he’s slightly plumper. Who isn’t, it was 20 odd years ago.)

What is your favourite childhood book?

Brendon Chase by BB. Written in 1944 but set in the inter war years. This book was about 3 brothers who ran away and spent 8 months living in the forest near their house. Although, this was a close-run thing with Willard Price’s adventure books, and only because I couldn’t pick my favourite out of these. This series of 14 books chronicled the exploits of budding teenage zoologists Hal and Roger Hunt, as they travel around the world capturing exotic and dangerous animals for their father's wildlife collection. The first book was published in 1949 and continued until 1980.

This will sound like a suck-up, but I’m currently reading The Sinner and The Saint by RJ Scott. J I’m also reading ManEater by Dick Jones, which is a remastered 1970s gay pulp novel. It’s definitely different to the stuff I read on a daily basis.

Many, in fact too many to count. Although as I have a memory like a sieve, most of these characters are written up on scraps of paper somewhere.

That depends on the book. Contemporary books obviously need a lot less research, but I’ll still research anything that I don’t know. When I wrote Theory Unproven I was googling things like ‘Can an elephant run?’. Historical stories need much more research and sometimes it really helps to call in an expert in the era. But I’ll use every resource at my disposal, books, blogs, documentaries, and people. The only thing I try to avoid reading is gay romance with the same subject for fear that I may absorb plot points by osmosis.

That’s easy. Promo. I hate blowing my own trumpet and I resent ‘wasting’ time on promo when I could be writing. I need a ‘Rachel’ but don’t yet earn enough to pay one.

I’ve mentioned Theory Unproven in a previous answer and it was a book that was originally published by Love Lane Books, so it seems appropriate to mention it here.

As of 1st May, Theory Unproven has been transferred to Kindle Unlimited for the next three months.

For your chance to win a an ebook of Theory Unproven answer this question…What book are you currently reading? 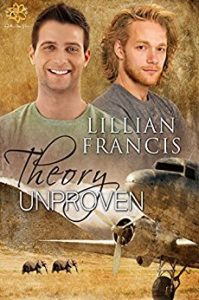 Working with elephants in their natural habitat has always been Eric Phillips dream. Getting what he’s always desired introduces him to Tyaan Bouwer, the bush pilot that flies in his supplies, and Eric discovers the allure of South Africa goes beyond the wildlife and the scenery.

But in an area where bushveld prejudices and hatred bleed across the borders, realising their love will be a hard fought battle. Keeping hold of it might just kill them.

An unexpected job offer finds zoologist Eric Phillips transported from the elephant house at a zoo just outside London to the wildlife reserves in the South African bushveld. Being able to work with his own herd of elephants, and analysing their behaviour, more than makes up for the remote nature of the research station. The one bright spot on the horizon, quite literally if the sun hits it at the right angle, is the silver freight plane that brings his supplies and half an hour in the company of Tyaan, the gorgeous but taciturn pilot.

With wide open spaces and clear skies, Tyaan Bouwer is never be happier than when he’s flying over the bushveld, the landscape beneath him a changing vista of colour and texture. It’s that view and the freedom to be able to climb in his plane and fly that’s kept him in the small town where he was born and raised. South Africa might be a rainbow nation but in the northern regions where neighbouring countries are far from liberal minded, prejudices and hatred bleed across the borders. Tyaan’s not in the closet, not really. Get him to the city and with his strong, silent routine he can pull a guy without even trying. He’s fine with that as long as they don’t press him into trying to see them again. It’s not like he wants a relationship. And just maybe when he gets home he’s hovering in the doorway of that closet, but he’s never met anyone worth taking the risk for.

The day he’s sent to Limpopo to collect Eric that all changes. He tries to bury the feelings of want that Eric conjures in him, but he can’t resist the bonds of friendship that forms between them.

As a zoologist Eric likes to think that he’s adept at anticipating how a creature will react in any given situation, and they don’t come any more beautiful and skittish than Tyaan. Despite Tyaan’s jittery behaviour Eric has a theory they could be good together but when things go catastrophically wrong it appears their relationship will remain a theory unproven.

Lillian Francis is a self-confessed geek who likes nothing more than settling down with a comic or a good book, except maybe writing. Given a notepad, pen, her Kindle, and an infinite supply of chocolate Hobnobs and she can lose herself for weeks. Romance was never her reading matter of choice, so it came as a great surprise to all concerned, including herself, to discover a romance was exactly what she’d written, and not the rollicking spy adventure or cosy murder mystery she always assumed she’d write.