I do! He doesn’t even have a name yet, but his personality, appearance, and history are set. I keep brewing up thoughts for his romance arc, but I need a good story to set the backdrop for him. So far my ideas involve years going by, so I need to figure out the best way to make that work.

Unfortunately for this character, I have another story idea (involving time travel) that can’t involve him. That other plot bunny is taking priority in my mind and will probably see the light of day sooner. But, even that idea is taking a backseat to my current writing projects (the “Dream On” series rewrites and completing more short stories to minimize the time gap between lengthier releases—look for my short light fantasy story, The Contingency Plan in April).

Do you work to an outline or plot or do you prefer to just see where an idea takes you?

I generally have the story concept in my head before I start writing, but I don’t do a formal outline. The details are driven by the characters as I go along, and sometimes the story plan changes (a little or a lot) because of it. Occasionally I start writing without knowing how the story will resolve. For example, in To Love and To Cherish, I always knew it would be a marriage of convenience story, but I wasn’t quite sure how the characters were going to fall in love with each other. I was stuck at the end of chapter seven until the idea occurred to me, then the story took off and flowed from there. I end up having to go back and make adjustments and tweak things to better fit the ultimate direction of the story, but it works in the end.

I can’t think of any research that I’ve done before beginning any of my stories, but I’ve done quite a bit during the course of writing them. I like to get the details right, so what kind of research I do is pretty much anything and everything that I don’t already know—from what’s the weather like in San Diego in early November to how long would a dead body float in the south Pacific Ocean.

How much research is done depends on the story. Anyone who’s read ’Til Death Do Us Part can probably imagine how much went into that (lots and lots and lots)! That’s where the floating dead bodies came into play, along with ways to take down an airplane, where is the “black box” located, what foods might cause constipation, etc. I even calculated how far away an island might be if only the treetops of the tallest trees were visible to people standing on the end of the wing of a plane “x” feet in the air, taking into account the height of said trees and the curvature of the earth. Turns out the answer was “too far” to be feasible for them to make it to that hypothetical island, so I went with them spying the island without specifying it was only the tree tops.

I put together a massive spreadsheet detailing various seaweeds that would grow there, and what seasons they can be harvested, what their nutritional value and other effects/benefits are, and how they’re used. I didn’t want to make readers’ heads totally explode by mentioning extra details like how they could only eat this or that seaweed variety during certain months, but I did consult my chart and make sure whatever I mentioned was an option for the time of year in which a particular scene was set.

What’s your favorite TV show, and why?

Supernatural. For the most part I don’t watch TV (so I don’t bother paying for cable). I’ve got Netflix, Amazon Prime, and HBO Now, and I use those for movies (and Game of Thrones, and a few kiddie shows for my granddaughter). Supernatural is an exception, and I buy the season on Amazon each year so I can watch it as new episodes come out. It’s hard to say why I’m so drawn to that show. Going back and rewatching early episodes I wonder why I stuck it out, because some of them are so lame. But, the characters are appealing, and they keep the show interesting, throwing in fun (and often funny) twists and turns. Oh, and they’ve got good music (ha!).

You step outside and find a lottery ticket that ends up winning $10 million. What would you do?

“Find” it? Hmm, I’m going to answer based on the assumption that there’d be no good way to discover the ticket’s legitimate owner.

First thing I’d do (after the happy dance) is look into how to split it between myself and my kids in a way that would minimize the tax bite. Then with whatever was left I’d invest to maximize income and only spend that. I wouldn’t make any grandiose plans. I just want to not have to worry about expenses, and be able to make regular donations to causes I believe in. Knowing that I’ve taken financial worries away from my kids would bring me more happiness than “things” at this point in my life.

For your chance to win a backlist ebook from Addison answer this…You step outside and find a lottery ticket that ends up winning $10 million. What would you do? 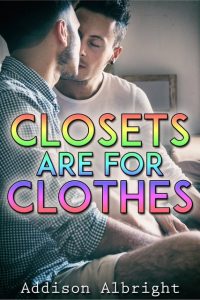 Closets Are For Clothes – OUT  February 24

Mike’s life is carefully compartmentalized. He’s deep in the closet to his family back in Kansas, but lives life honestly and openly in Austin. He’s unnerved when Wes, his old university crush, turns up at his door in answer to a roommate advertisement, but quickly sees the potential … benefits of the arrangement. Wes has never doubted nor denied his sexuality. With the support of his family he’s an out and proud LGBT activist.

On the scale balancing his self-esteem on one side, and the love of his family on the other, Mike has to decide which weighs more. Is Mike being fair to his parents by not giving them the chance to know his real self? When the delicate balance of his life is disrupted, he decides he’s tired of living a lie. Will Wes understand his concerns, or will their fledgling relationship crumble under the strain of Mike’s uncertainty?