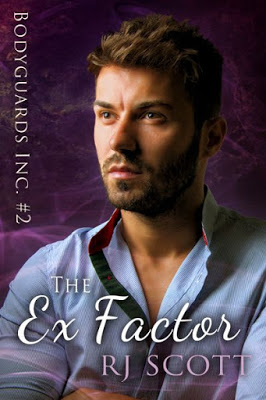 I love the strong silent uber-heroic types with the mushy insides. I love that moment in a film where the taciturn hero reveals that side of him that is caring and thoughtful and at the end of the day VERY heroic. This is exactly how I pictured Ben in The Ex Factor (Bodyguards Inc book 2)

When I wrote Ben I had in mind this really big guy who people don’t mess with. He’s strong, silent, and bloody good at his job. He keeps his poker face on at all times and even though he’s approachable he's all about the job.

So if you like your heroes quiet and reserved until the shit hits the fan, then Ben might just be your kind of hero.

When Bodyguard, Ben Collins, finds Daniel Lincoln in a room, hiding and hurt, he doesn't immediately think Daniel is the victim of abuse. Daniel is good at pretending and being a finalist in a TV singing competition he seems like he has it made.

But something about Daniel calls to Ben's need to protect and he hands Daniel a card to contact him if ever Daniel needed help. Abruptly, after one frightened phone call from Daniel, Ben is racing to Daniel's aid and what he finds is a horror he can't imagine.

“Daniel?” Ben asked with question in his voice. “They’re looking for you.”

Daniel pulled himself up, and if anything he forced more effort into standing tall and straight.

“Yeah, just needed a quiet space,” he explained. In his head he was gesturing around him with a free hand, but in reality he couldn’t much move his right arm, which was going to fuck with his ability to play guitar. He thought maybe his shoulder was separated somehow. He’d seen Mel Gibson knock his own arm back into place in Lethal Weapon once, but that wasn’t happening here. He sure as hell wasn’t a hero who could push through pain.

Daniel floundered for something to say, and the line he came out with was pretty pathetic. “I’m not sure you’re supposed to say that to me.”

“What the hell happened to you?”

Ben placed his coffee on the nearest box and walked over to Daniel, and Daniel couldn’t help the instinct that made him stumble back and end up against the wall.

Why did you choose a room with no way out? What are you? Stupid?

“Don’t come near me,” Daniel said in his loudest, most strident voice, even though it was nothing more than a forced whisper to his own ears.

“Fuck, Daniel, seriously? What the hell?”

“I don’t see any bruises on your face,” Ben said simply, carefully. “You’re holding yourself like you have a chest injury? Or your shoulder? What did you do to yourself? We need to get you to Casualty. I’ll call the medics.” He turned to leave, to find the one group of people that Daniel didn’t want anywhere near him. Cam would fucking end him if he involved the authorities.

“No!” Daniel said loudly. The pain of the words radiated from his chest to his shoulder, and if it wasn’t for the wall, he’d be on his knees or unconscious. “I just need more codeine.”

Ben moved closer, but this time there was nowhere for Daniel to go; he’d run out of room. He closed his eyes tightly and waited for the first blow or the spitting accusations of how the fuck he had let himself get in this state. Instead all he got was a gentle touch to his left hand, the one without pain radiating down to it.

“Daniel, you need to listen to me. You know me. I’m Benjamin Collins, with the bodyguards. You can call me Ben.”

“I know your name,” Daniel said defiantly. Maybe if he said how little he knew, then Ben would just leave without hurting him.