by Rachel Maybury
495 views
No Comments
0

It's Wednesday, it's Hump Day and today we've got the lovely Annabelle Jacobs in the hot seat!

What was your hardest scene to write in this book?

Ooh, one particular bit comes to mind, but it's a lot spoilery, so I can't possibly say, lol. It made me sniffle a bit while writing it. Generally I find fight scenes both hard to write and also my favourite things to write. It can be difficult to get what's in my head to translate onto the page without confusing everyone. And injuries. I have to get a lot of help to try and get those right.

What is it about shifters that you love writing?

The fact they can change into another form, and getting to describe it in detail. I love the fated mates aspect, even if I don't use it in all my books. I love that you can have that storyline if you want, that two people can be drawn together and connected on such a base level, for life. And I love the way shifters feel everything so viscerally, with every fibre of their being. Basically I love letting my imagination run wild and creating a world where anything goes, and there's a little bit of magic involved in the whole thing.

Tell us a little bit about the world “Escape” is set in?

It's set in the UK, where shifters are known about. But instead of a human government in power, shifter packs have taken over and hold all positions of power in both government and industry.

How do you chose the names for your characters?

Um.. Sometimes I use the random name generator, sometimes the end credits of films. It used to be people I know, but I've about run out of those.

How many books will be in this series?

In my head, I'm thinking three. But that all depends if I can stick to my plans!

For your chance to win a backlist ebook from Annabelle Jacobs answer this question – what animal would you be if you were a shifter? 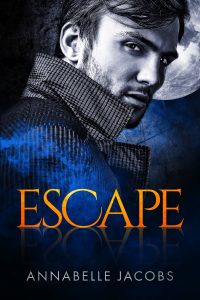 ADD TO GOODREADS – OUT AUGUST 20

This isn’t the life Cole dreamt of, but what choice does he have?

With his twenty-fifth birthday behind him, Cole Moreton now faces the shifter compatibility test which will decide his future. Testing positive means joining a pack and eventually taking the bite. Unfortunately, with enviable skills in self-defence and hand-to-hand combat, the kind of packs interested in him aren’t any he’d want to join.

Logan has been a member of the McKillan pack for most of his life. Pack is family and loyalty is everything, but when the shifter government turns out to be no better than the oppressive humans before them, he questions everything.

Right from their first meeting, Logan knows that a life with the McKillan pack isn’t right for Cole, but with his alpha taking a keen interest in Cole’s skills, Logan’s hands are tied. Mutual attraction builds between them, but acting on it is futile—helping Cole will put their lives at risk and an end to any future they could’ve had.

Sign up HERE to Annabelle's Newsletter and claim a free book!