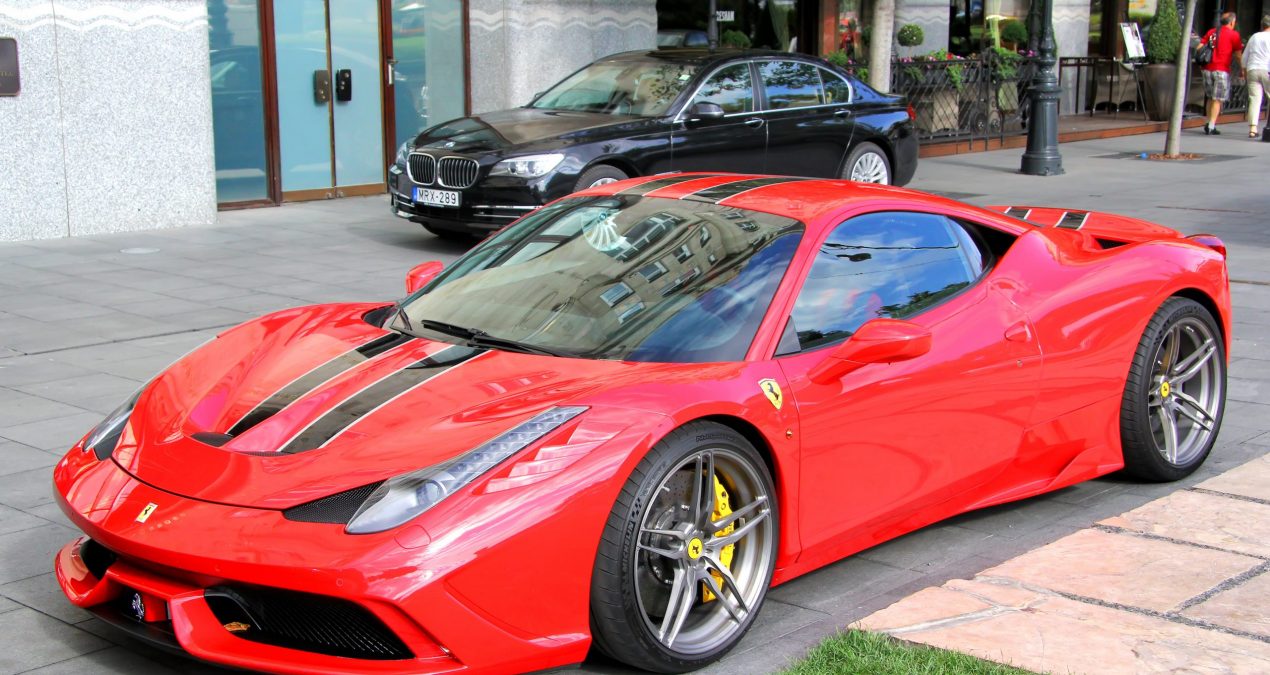 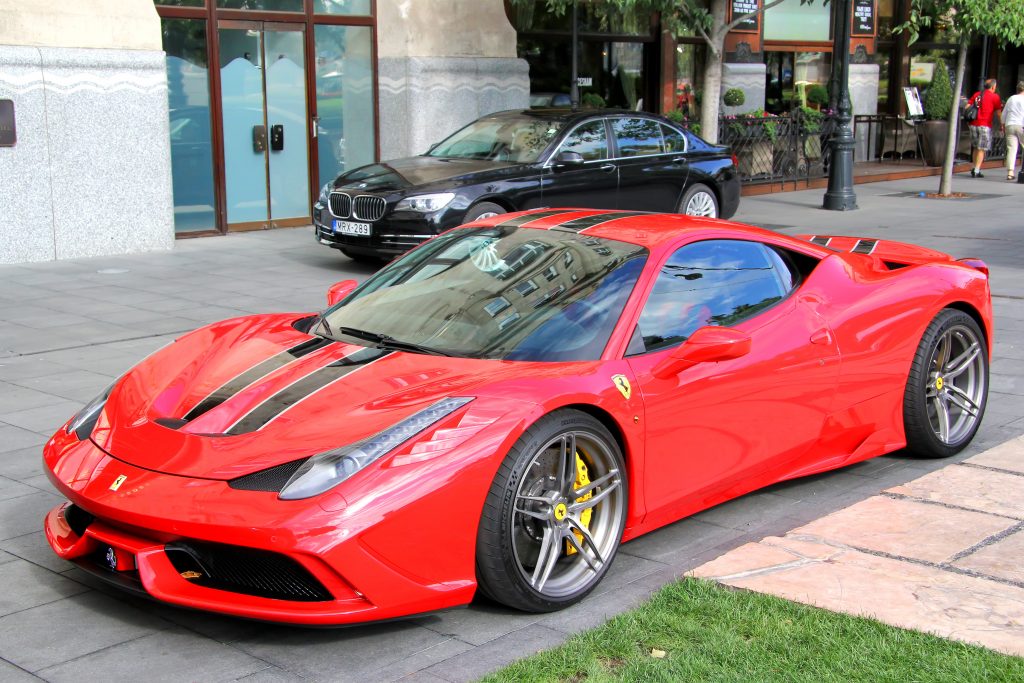 From car chases in The Dukes of Hazzard when I was a kid, right up to the special effects heavy car chases in films like the Matrix, Die Hard 4, and Mission Impossible, not to mention the beginning of Deadpool! I am fascinated by how far each TV show or movie can take a chase.

There is something incredibly sexy about a hero who can handle a car well, and do all the fancy stuff that gets everyone out alive.

I wanted a car chase in Accidental Hero (Sanctuary book 8), the first book in the Chicago arc, and decided I needed to involve someone who can talk about the physics, sounds, and smells, of a car chase. So I involved hubby who is a car nut. He's a huge Ferrari fan as well, so we decided that the hero, Cain, would have a Ferrari and also have undertaken evasive driving lessons as the son of a Governor.

He took care of the way a car like that would turn into corner, talked about the grip on the road, and the physics of how the car would act in a chase, building a picture of the chase itself and the kind of things the followers would need to drive to be able to keep up. I took care of making it fancy, and about how the characters inside the car were reacting. Simon is desperately trying to get in touch with Sanctuary for navigation back up, Cain is pissed that his car could potentially be trashed, there are bad guys shooting at them.

It worked really well in the end and I am immensely proud of that whole scene.

Cain might not be some fancy-ass operative, but he knew how to run, and he was at the car and inside before he could take a breath. He immediately connected to Albany Ops even as he started the engine and reversed at speed out of the space. “Under fire, open the security gates,” he ordered, hoping to hell Ops were quick enough to get them out of here.

He pushed the Ferrari into first, wincing as the gear stuck before his foot hit the floor with the clutch. His baby wasn’t built for tight turns in parking lots and being thrust from reverse to forward with such painful movements. Mind entirely on auto, Cain switched the traction control off, and floored the Ferrari, fishtailing a little, bullets skimming the polished hood, and he ducked with each one. He spotted Simon and pulled up next to him. A bullet glanced against the passenger window; the glass became a spiderweb of cracks but stayed whole. Simon yanked open the door, then fell in, and Cain accelerated away even as Simon slammed the door shut.

The gates started to open. Cain angled the car right to the center, wincing as the still-opening gates scraped either side but letting out a momentary sigh of relief when they made it through.

“Shut the gates,” Cain said, but his earbud was silent. “Ops?”

“What’s wrong?” Simon shouted over the noise of the engine. He was struggling with the seat belt. He shouldn’t be having this much difficulty, then Cain saw why—blood on Simon’s hands. He didn’t have time to ask Simon about it because two cars made it out of the parking garage and slid into position behind them.

“Fuck! Where are you, Ops?” Cain said through gritted teeth. “I’m driving blind around this city.”

A split-second decision and he decided to head away from people, taking the next left, then hard right into a side street and momentarily losing their tail. Perspiration dampened his hands and brow, adrenaline pumping through his veins. Finally, Simon was belted in, and apart from having to make the journey decisions and being chased by bad guys with guns, Cain was kind of enjoying this—unless, of course, he wrecked his precious Ferrari.

They were traveling fast now, Cain pushing the limits of safety in a city location, watching for pedestrians on the sidewalk. A quick stab on the brakes and he took a sharp left onto a two-lane road.

Accelerating hard as they approached the end of the road, Cain was forced to slam on his brakes. They screeched to a halt. Without warning, their exit up ahead was blocked. Two huge SUVs stood bumper-to-bumper, blocking their exit.

“What now?” Simon asked with urgency.

“Ram them or J-turn,” Cain said without explanation.

“Jesus, Cain, we’re not ramming them.”

Cain had practiced J-turns: the art of reversing a car at high speed spinning a full one-eighty and accelerating the other way. Just one thing… he hadn’t practiced in such a small space and never in his own car; the Bentley had been quick to turn but was built bigger. He slammed the car into reverse and accelerated hard the way they had come. With a deft application of parking brake, correction of the steering wheel, a perfectly timed change into second gear, and just a little bit of luck, the car had turned in the opposite direction to his pursuers.

The fender glanced the curb and Cain took a large intake of breath.

Left back onto the main drag, and Cain’s mind was searching for his next move. Just as he got his mind straight on this, the roar of powerful vehicles had him glancing in his mirrors again. Two Yamaha R1 motorbikes were now on his tail and the leather-clad passengers perched precariously on the small pillion seats were tooled up with some pretty serious-looking firepower.

In fucking Chicago. In broad daylight. What the hell?

“I’m not seeing a way out of this,” Cain snapped over the roar of the engine. He couldn’t help the rising panic as bullets tore down the side of his car. His Ferrari was quick but not against R1s. This was taking a test of his driving skills a step too far. Inside his head he was talking slowly to himself, his brain making lightning-fast decisions, he needed to stay calm and keep control of the situation.

Come on, remain cool. Your dad trained you for this very situation.

Advanced evasive and defensive driving skills was the one plus he had on his application to Sanctuary. That, and his organization skills, and his love for gadgets… was what he did.

Approaching the next junction at high speed, the Ferrari’s steering abruptly went light in Cain’s hand. The car slid momentarily out of control. Oncoming cars were forced to take evasive action. In front of them, loud car horns sounded and irate drivers shouted and gestured at what Cain had done. He couldn’t help it. He had no traction, a goddamn truck must have dumped diesel all over the highway—the surface was like a freaking skating rink.

He managed to bring the car to a halt, ABS pulsing through his foot to remind him of how perilously close he was to the edge. On autopilot he stabbed the throttle—a flick on the steering wheel and smoke billowing from the tires, a cacophony of screeching and the unpleasant aroma of burning rubber and over-abused clutch filling the interior, and he had the car facing the pursuing motorbikes. What had seemed like bad luck had actually caught him a break.

The two pursuing motorbikes weren’t quite so lucky. They hit the diesel and instantly were thrown sideways, riders and pillions sailing down the road, narrowly missing a head-on collision with the Ferrari.

Only a few days until Winter Cowboy is available