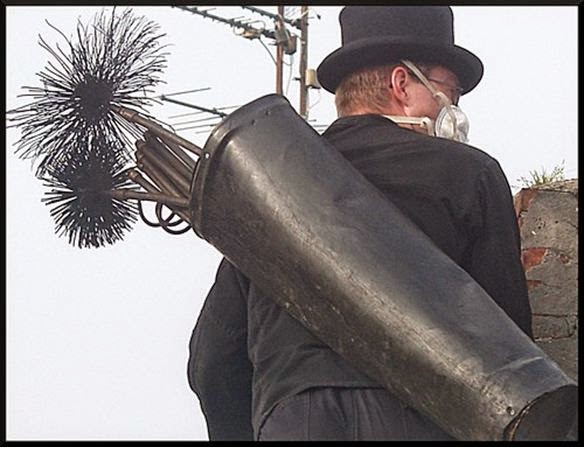 Thanks to RJ for letting me hijack her blog today.

I’m here to talk about my new release ‘When Love Flue In’, or I was until Reagan decided he wanted to chat to you all.

That's not me in the picture by the way, my hair is darker, there's a chance my ears are bigger and I don't wear the traditional get-up to actually do my job. Especially not the hat, I hate the hat. No, on the job you're far more likely to find me in dirty jeans and a T-shirt.

Before you ask, nope, I’m not a cockney. I’m from the West Country, a small village in Somerset to be precise. Not that any of the London sweeps I’ve ever met speak like Dick Van Dyke. I can’t sing either, in case you’re wondering. As for nifty dance routines on the rooftops, well, I don’t think Health and Safety would be too impressed. Anyway the closest I get to dancing is flailing my limbs around on the dance floor at the clubs I go to. When I get the time. And I can slow dance with the best of them, but can’t we all? I mean, what’s difficult about leaning into the latest hot, hard body?

I say the latest because I can’t seem to keep a boyfriend longer than a month.

I know I’m not what you’d call traditionally handsome, but I’m not likely to scare small children or curdle milk. As for the rest of me, hell, sweep work is physically demanding—I never need to visit the gym—and my body reflects the effort that my job demands.

Maybe it’s the hassle of being self-employed; some guys don’t understand that when you work for yourself, occasionally you need to make sacrifices of your time. In the quiet summer months I can supplement my income by appearing at weddings. It’s a tradition that capitalises on the superstition that sweeps are good luck, dating back to a story that claimed George III’s life was saved by a chimney sweep. I said I can’t really dance but I can jump a broomstick. Of course, that means most of my summer work is weekends, which pisses the boyfriends off no end.

Then come September, my work starts in earnest and I’m busy, busy, busy. It’s rare that emergency calls need to be made, most people schedule their yearly cleans well in advance. But occasionally there are problems, flues catching on fire where people have skimped on the need to have their chimney swept. Sometimes people forget, or their circumstances change and they suddenly realise in a panic that it’s Christmas in two days’ time and the sweep has yet to make an appearance. I try to accommodate all my regular customers, but a callout on Christmas Eve, well, that’s never going to happen.

Unless… No… Who am I kidding? There’s one customer who I can’t deny. Not that it’s ever going to lead the places my fantasies would like it to go. Maybe that’s another reason why I can’t keep a boyfriend, my unquenchable desire for the unattainable.

Wow, that was some tangent. You don’t want to hear about my sex life, or should I say lack of it, and I certainly don’t want to talk about the blond Adonis who fills my dreams, and most of my waking—or is that wanking–fantasies.

Let’s get back on track, chimney sweeps… I could forgive you for thinking my story is a historical one. Sombre scenes of child labour and smoke-filled skies. Rotund capitalists eagerly exploiting small urchins, sending them up chimneys; quite regularly to their death.

No, this is the twenty-first century not Victorian England. Thankfully. My sexual proclivities, as I think I’ve possibly already implied, embrace all that is male. It’s a fact I’m not in the slightest bit ashamed about, but a situation that would have been unimaginable a hundred years ago.

Got distracted again. Where was I?

Once a profession in decline due to the 1956 Clean Air Act, nowadays chimney sweeps are making a resurgence. Physically fit men and women can once more be found in the hearths’ of many homes across the country, due to the credit crunch and rising energy prices. I specialise in open fires as opposed to wood burning stoves, although I do have the training to tackle both. I just prefer to work on an open fireplace. Sometimes it can be a dangerous job, or so the Health and Safety Executive tells us. We may not be sending small children up to clear the blockage or dancing on loose slate tiles but the job can have its hazards.

I’ve been attacked by a trapped bird, just missed being brained by a falling brick, lost my heart to a man I can’t have, been stranded on a roof when my ladder fell and ruined more T-shirts than I care to mention.

Then there’s the problem with the soot, it’s carcinogenic. And that can mean long-term health problems if you’re not careful. I always wear a mask. No, that’s not actually true, there are five occasions I haven’t worn a mask, but what’s five chimneys out of hundreds. And technically it’s always been the same house, the same chimney, the same blond-haired picture of perfection watching me. My mum would kill me if she ever found out I was playing fast and loose with my health like that, especially since it’s just because I don’t want to look like an idiot in front of a man who always looks so amazing.

All in all, I love my job. I work for myself, travelling the county, with some amazing scenery as the backdrop to my work, especially if I have to go up on the roof. I’m rarely treated with apathy. My regular customers always seem pleased to see me, treating me like an old friend. At the weddings I appear at I’m treated with the reverence for the luck bearer I’m purported to be.

So what if it’s a dirty job, someone’s got to do it.

I can always shower.

When I get home. 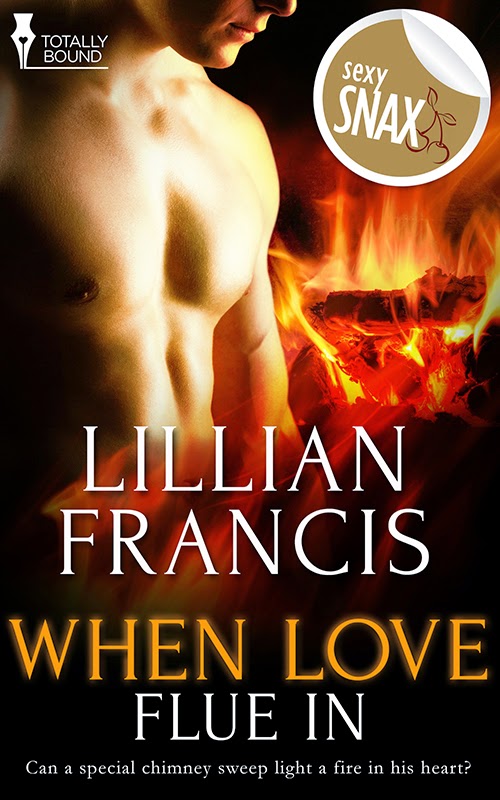 When Love Flue In

A soot-haired chimney sweep, an exploding flue and an uncooked turkey. It’s an unholy trinity that may make all of Dominic’s Christmas wishes come true.

Dominic is celebrating his first Christmas since his divorce, and although he’s spending it on his own, he’s determined to have a traditional Christmas morning, including a roaring fire. Unfortunately, Dominic’s chimney is blocked, which is why Reagan, a soot-haired chimney sweep, is head and shoulders up Dominic’s flue. Dominic is just lucky the man had a cancellation on Christmas Eve.

Unable to take his eyes off Reagan’s low-slung jeans and enticing arse while Reagan sets about the hearth with rods and brushes, Dominic knows five years is a long time to be obsessed with the man who sweeps his chimney every Christmas. This year there’s nothing to stop Dominic from acting on his desires—except his own insecurities.

An exploding flue provides the opportunity for more than just polite conversation and could be the catalyst for a perfect Christmas. But Dominic will need to stop hiding who he really is before a special sweep can light a fire in his heart.

Publisher's Note: This book was previously released by another publisher. It has been revised and re-edited for release with Totally Bound Publishing.

An avid reader, Lillian Francis was always determined she wanted to write, but a ‘proper' job and raising a family distracted her for over a decade. Over the years and thanks to the charms of the Internet, Lillian realized she’d been writing at least one of her characters in the wrong gender. Ever since, she’s been happily letting her ‘boys’ run her writing life.

Lillian now divides her time between family, a job and the numerous men in her head all clamouring for ‘their' story to be told.

Lillian lives in an imposing castle on a wind-swept desolate moor or in an elaborate ‘shack’ on the edge of a beach somewhere depending on her mood, with the heroes of her stories either chained up in the dungeon or wandering the shack serving drinks in nothing but skimpy barista aprons.

In reality, she would love to own a camper van and to live by the sea.