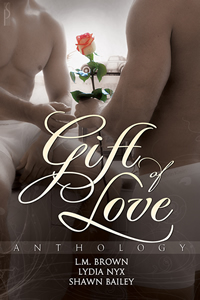 Can a wrong number lead to Mr Right?

Nick Davis’s life is stuck in a rut until a stranger starts leaving messages on his answer machine. Connor Hayes has mistaken Nick’s number for that of his boyfriend, giving Nick an idea of what it would be like to have Connor in his life. Connor seems like his ideal man and although Nick knows he’s not Connor’s ‘baby,’ he can’t stop himself wishing he were.

After the wrong number issue is resolved, Nick doesn’t expect to hear from Connor again. He's pleasantly surprised when he does. Unfortunately for Nick, Connor isn’t looking for a boyfriend. He already has one and now he wants Nick to help organise a surprise Valentine’s weekend for the couple.

Can Nick put his own feelings aside to make sure Connor’s Valentine’s Day plans go smoothly?

What happens when an angel and a demon fall for the same mortal man?  Tristan is about to find out and it will change his life forever.

The ménage the trio forms is filled with jealousy and insecurities, passion and love.

Only time will tell if their relationship is forged in Heaven or Hell.

The Heart of Eden (under revision for resubmission later this year)
Since the death of his wife Luke Eden has lived for two things, his son, Mike, and his garden centre.  Now his son is getting ready to fly the nest and Luke knows it’s time for him to come out and tell him why he has never remarried.  He doesn’t realise Mike already knows about his preference for men, and has plans of his own to find his dad a boyfriend.

Between Good & Evil (Heavenly Sins – Book 2)
It isn’t always easy to do the right thing, especially when you’re bound to a demon.  Sometimes people get hurt.  That’s when you find out it isn’t just the demons you need to worry about, because a wronged human can be far more dangerous.

My Boyfriend is an Alien (A Young Adult m/m story)
Ever wondered if your boyfriend was from another planet?  In Ashley’s case, it’s true.

Forbidden Waters
Banished from the ocean because of his sexuality, merman Kyle finds a new life and love amongst humans.

The Life Not Lived
What if you got to relive your life and had a second chance with the one that got away?