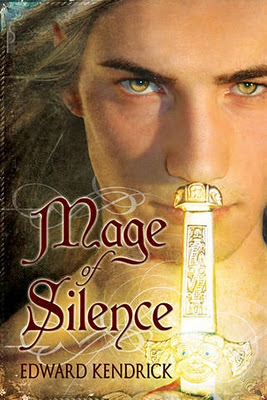 Castien, an elf mage who cannot speak except with the aid of a magical dagger, has been captured while on a mission. He is freed by his companion, the warrior elf Daeron, and returns with him to Daeron’s homeland. There they will join forces to rid the land of a Lord bent on the destruction of the elves.

Theirn, a young half-elf thief, attempts to rob Castien during his stay at an inn and is caught by the mage. Much against Theirn’s will he is enlisted into the group of rebel elves. But as Theirn's infatuation with Castien grows, he becomes more than eager to risk treachery, betrayal, and even death on dangerous missions just to be close to the man he is growing to love.

Agents Rafe and Steele are on the run after discovering their boss is a traitor. Single father, Grant, gets sucked into the intrigue and must elude capture with the help of Agent Anders until the information they hold can be given into safe hands.

The rest of the blurbs are unofficial at this point:

Mar. 3 – ‘Melange'
When two vampires, one vampire’s ghoul, and a shifter fight to protect each other from a vicious creature bent on survival at all costs, unrequited love and new love are awakened in the process.

April 7 – ‘Abstract Realism'
Tonio, an artist, is in self-imposed hiding after an attacker scars him both physically and emotionally. When the attacker reappears Tonio seeks help from the handsome bodyguard Jonam. It falls on Jonam’s shoulders to keep Tonio safe, and in the process teach him to live, and perhaps love, again.

May 5 – ‘Phoenix Rising' – Book One of Phoenix Rising Series
Hex Phoenix, entrepreneur, businessman. Hunted because of what he is, the Phoenix. Assisted by his lover, Urbain, he escapes the most recent attempt to capture him. Resurrected as Conleth, he is again hunted, by the RIRA and the mysterious Giuliana. Mix in Urbain and Roger and fireworks will explode.

June 2 – ‘Forbidden Fruit'
Theft and murder are all in a day’s work for PI Sam Young, as is protecting Jamie, a young man living in terror of his ex. Love however is another thing. Can he convince Jamie their growing attraction is real?

June 30 – ‘We Are the Guardians' – Book Two of the Phoenix Rising Series
Mayhem and murder, Giuliana, Robin, and bitter foes Roger, who is gay, and Rico, who is straight, handle both. Recruited into the ‘old man’s’ clandestine organization, to which the others belong, Rico must deal with job gone wrong and his growing attraction to one of the other members of the organization.

July 21 – ‘Weekends'
Over six holiday weekends can the developing friendship between confirmed forty-year-old bachelor Marcus and free-spirited twenty-three-year-old Demitri turn into more? Will Marcus realize it is possible for Demitri to love him or will he fight their developing May-December romance?

Aug. 25 – ‘You Can't Change the Past' – Book Three of the Phoenix Rising Series.
An assassin targets Conleth, going after his people to reach him. Policewoman Ginna Smith becomes involved and is recruited to join Vance’s team. As their attraction for each other grows he must stop a stalker before Ginna too is attacked.