And last but not certainly not least, I'd like to introduce the fabulous Charlie Cochet…

Hello, all! Thank you so much for joining me here today, and a big thank you to RJ for having me! This year Dreamspinner Press will be releasing the fifth book in my North Pole City Tales series, Disarming Donner. For those of you who may be unfamiliar with the series, it centers around the Rein Dear, Mayor Kringle’s handsome and dashing Christmas elves who fly around the world on Christmas Eve in their biplanes delivering Christmas joy.

Throughout the series, we follow several of the Rein Dear as they fall in love, from the Captain of the Rein Dear Squadron, Rudy Rein Dear, and the imposing Jack Frost, to the sassy Vixen and his timid Toy Soldier Army Lieutenant, Vale Frost. This year we have Donner, a posh, sensible Rein Dear who catches the eye of Calder, a Dockalfar. Calder is nothing what Donner expects from a dark elf, and soon his life is turned upside down, and he is not happy about it.

Writing this world has been so much fun, from coming up with elf curses like “plum pudding!” to each of the Rein Dear with their distinct looks and personalities. I get to immerse myself in the scents and sounds of the holidays every time I step back to North Pole City with its twinkling fairy lights and jingling bells. What’s your favorite part of the holiday season?

Leave your comment below for a chance to win a Rein Dear goody bag! Open internationally. 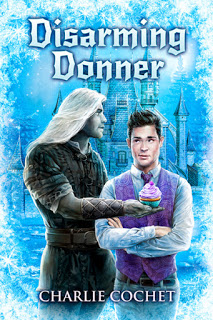 As a beloved Rein Dear and Christmas elf for Mayor Kringle, Donner prides himself on his flawless reputation, good sense, and wise decisions. Donner never does anything until he’s thought it through properly. He’s certainly not one to get flustered, infuriated, or fall prey to romantic nonsense. At least not until the most unlikely of elves begins chipping away at Donner’s defenses.

Calder is a Dockalfar—a dark elf. He’s wicked, untrustworthy, and armed with lethal magic. At least that’s what everyone thinks. It’s easy for them to believe the worst and mistrust him before they’ve even spoken to him, but Calder is out to prove that he’s more than his Dockalfar blood, especially to a certain Rein Dear who has caught his eye. But it will take more than sweet words for Donner to admit what’s in his heart.

Spotlight on Love’s Changes by LaQuette