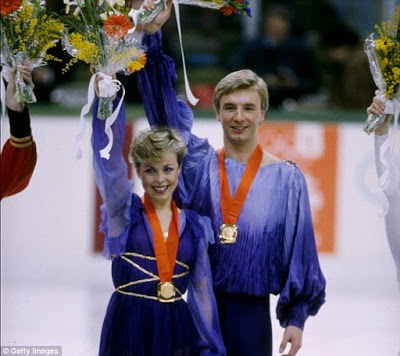 Yesterday was the release of Deep Edge, book 3 in the Railers series with VL Locey. In it we have an ice hockey player and a figure skater, in an opposites attract story.

As you all know I love hockey, but my love of this came from watching the pairs figure skating at the Sarajevo 1984 Winter Olympics. We had these skaters you see, the UK I mean, and we don't have an awful lot of people entering the Winter Olympics (or at least we didn't back then!). They were called Torvill & Dean and they were going to win something.

So we all watched, because, you know it was weird to have this thing happening. Robin Cousins was our other figure skater at the time, but like I said before as a country we don't have the investment in ice sports the same as we do in say, Football.

T&D won gold and became “… the highest scoring figure skaters of all time (for a single programme) receiving twelve perfect 6.0s and six 5.9s which included artistic impression scores of 6.0 from every judge, after skating to Boléro. …”

You can see the actual program here: https://www.youtube.com/watch?v=t2zbbN4OL98

They were national treasures from that day on!

Trent Hanson is a figure skating phenom adored by millions around the world. His whole life has been dedicated to the sport he loves even when the sport – and his own family – have turned against him. From the playground to the Olympics to his parent’s living room, Trent has fought against bullies and homophobes to be the out and proud gay man he is. But the constant fighting has left Trent tired, lonely, and skittish.

All those fears will have to be shelved though when he’s hired to spend the summer working with the Harrisburg Railers ice hockey team. Who would have guessed that the man fate has decided to pair him off with is Dieter Lehmann, all-around sex god and a man who seems to have everything to prove and doesn’t care who he hurts to get what he wants.

Dieter has spent too many years languishing in the minors and a secret addiction to prescription painkillers means his career is in a downward spiral. His ex is blackmailing him and he’s close to walking away from it all.

But when he’s called up in the run for the Stanley Cup to cover injuries he has a taste of what it’s like playing in the NHL and he realizes that a place on the Railers roster is what he wants more than anything. More than listening to his heart, and even more than caring for the infuriating figure skater who gets under his skin. When he crosses the line to get what he wants, he knows he has lost his way. He has to change, but is it too late for both his career and any chance he might have at love?