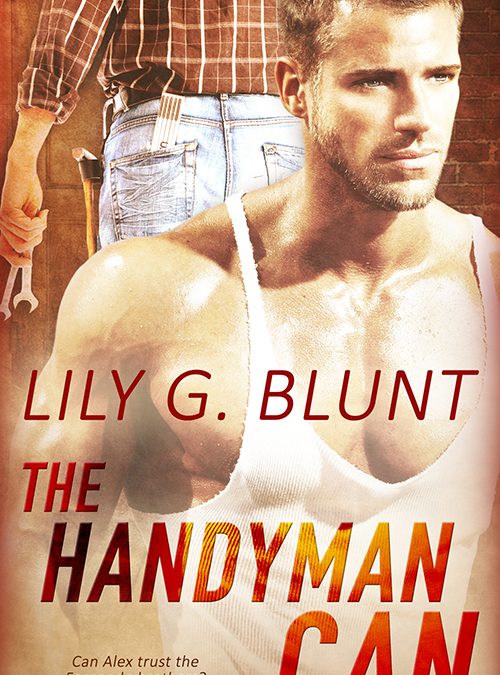 The Handyman Can by Lily G. Blunt

Alex is falling in love with Michael, one of the gorgeous handymen who maintain his property.

Can Alex trust the Fernando brothers or are they thieves?

After moving into his new house, Alex Sucre employs the three good-looking Fernando brothers as handymen to maintain his home and garden. He’s immediately attracted to Michael, the youngest, and enjoys watching his muscle-packed body through his study window as he works.

After a spate of burglaries in the area, one of Alex’s neighbors accuses the brothers of the thefts. Alex is reluctant to believe that any of them could be responsible, as their business is thriving and they appear to be honest men. But once that seed of doubt has been sown, Alex wonders whether they can be trusted.

Should Alex confront Michael with his suspicions and risk destroying their newly formed
relationship?

All it took was the clack of the garden gate closing. Alex Sucre’s breath paused, his heart raced. He shot a look from the spreadsheet on his laptop to the digital clock at the top corner of the screen.

Alex waited in case he’d misheard, but there it was, the gritty roll of the lawn mower on the path down the side of his house. Warm excitement rippled through him—his breath quickened, his heart pounded just that bit faster. He peered through the slats of the Venetian blinds strung across the study window and out into the garden, waiting expectantly. His cock stirred, a familiar and very welcome tingle. Alex was already anticipating what, or who, he was about to see.

Several whirrs of the motor’s pull cord rattled the near silence until it caught and the lawn mower burst into life, filling the quiet of the house. Alex leaned forward, adjusting the blinds, ready to ogle his gardener as he strode across the lawn. In his eagerness, Alex scattered papers onto the wooden floor.

He scooped them up and slapped them back down by his keyboard. Alex moved beside his desk, to one side of the window, not wanting to be caught snooping already.

Come on. Come on. Hurry up!

5* Review on Goodreads
“My review of this amazing story. I received an ARC copy of this book and OMG am I glad I did.

The Handyman Can, is gripping and sweet and thrilling and so much more. I just couldn't put it down. You have a brilliant mix of people in the neighbourhood where it is set from kind dears to busy bodies. My love fell to Alex and Handyman Michael. I won't give spoilers away because I want you all to enjoy this a fall in love with this book as much as I did. Let's just say it's a book you will be thrilled you bought and read and you will want more.

Go buy this asap once on sale and it's for pre sale as well so pick it up guys and gals.”

“Ahhhh… A short and sweet book to zap your endorphins after reading a long, angsty book. Or as I like to call them: Bathtub Books!

A Bathtub Book is a shorter book that is perfect to read in the tub, before the water gets cold. The Handyman Can is the perfect length and sweetness level to let you relax and enjoy.

Hunky handymen, sweet make out sessions and a bonus hot sex scene make this a win for me.

Enjoy Alex and Michael and the off-the-charts cover-hotness!”

4* Review on Goodreads
“The Handyman Can was a wonderful surprise. For a story only 38 pages long it was surprisingly full of recognisable characters and gripping storyline. I won’t go into the details of the story; the blurb tells you all you need to know. I will say that I got to know both Alex and Michael rather well as the story progressed and especially Michael charmed his way into my heart. I also loved Alex’s neighbours. They were an interesting, varied and recognisable bunch of people, just as you would expect in any neighbourhood.

I enjoyed the simmering heat when the story starts and the way it slowly built up to the steaming finale after all issues have been resolved. And I liked that this story provided more than ‘just’ a steamy romance; we’re also given the opportunity to enjoy a mystery with an action packed conclusion. Quite an achievement, considering the length of this story.

Having said all of that, I did have one or two reservations as well. Once or twice Alex came across as somewhat condescending in the way he thought about Michael and his brothers. As much as it is clear he is head over heals in love with his handyman, Alex’s thoughts made me a bit uncomfortable at times and somewhat worried about their future as a couple. My second reservation is connected to the first one; Alec was very quick to have doubts about the three brothers even if he doesn’t voice them to Michael. These were minor issues though. Overall the obvious and very hot attraction between these two men took centre stage and kept me rooting for them even when it seemed as if it might all be falling apart before it had even had a chance to begin.

Long story short: The Handyman Can is a hot, fast paced and well plotted story and as a result a thoroughly enjoyable quick read. If you find yourself with a spare hour on your hands I recommend this story whole-heartedly.”

Lily discovered the wonderful world of m/m romance novels five years ago via fan fiction and went on to write stories in her spare time. With the encouragement of her friends and readers she decided to publish some of her work. Lily subsequently self-published several stories via Amazon. She later published short stories with Torquere Press and Wayward Ink Publishing. Lily is excited about joining Pride Publishing for her latest release, The Handyman Can.

Lily is an avid supporter of GLBTQ rights and advocates equality for all. She was recently a steward for Pride in London. She lives in central England with her rather bemused husband and a ‘mad as a bag of frogs' Shetland Sheepdog called Barney.

Competition to win a signed copy of The Gallows Tree in print:

How did we know Matt had autism?