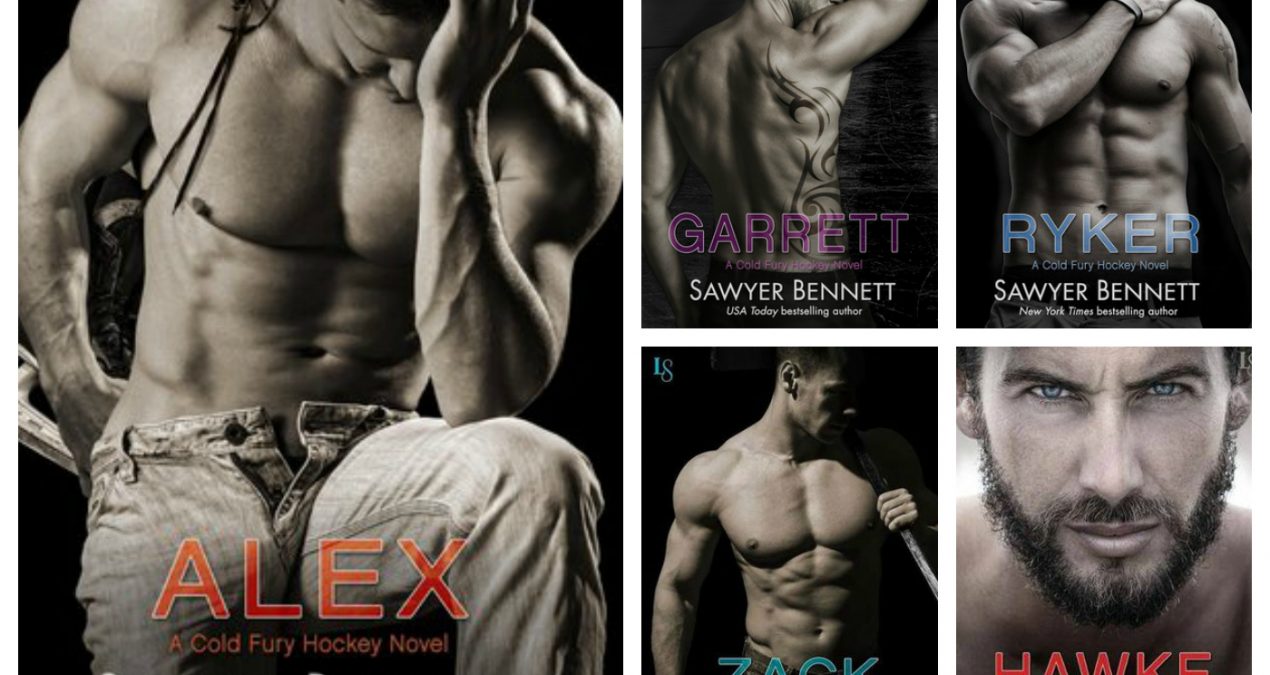 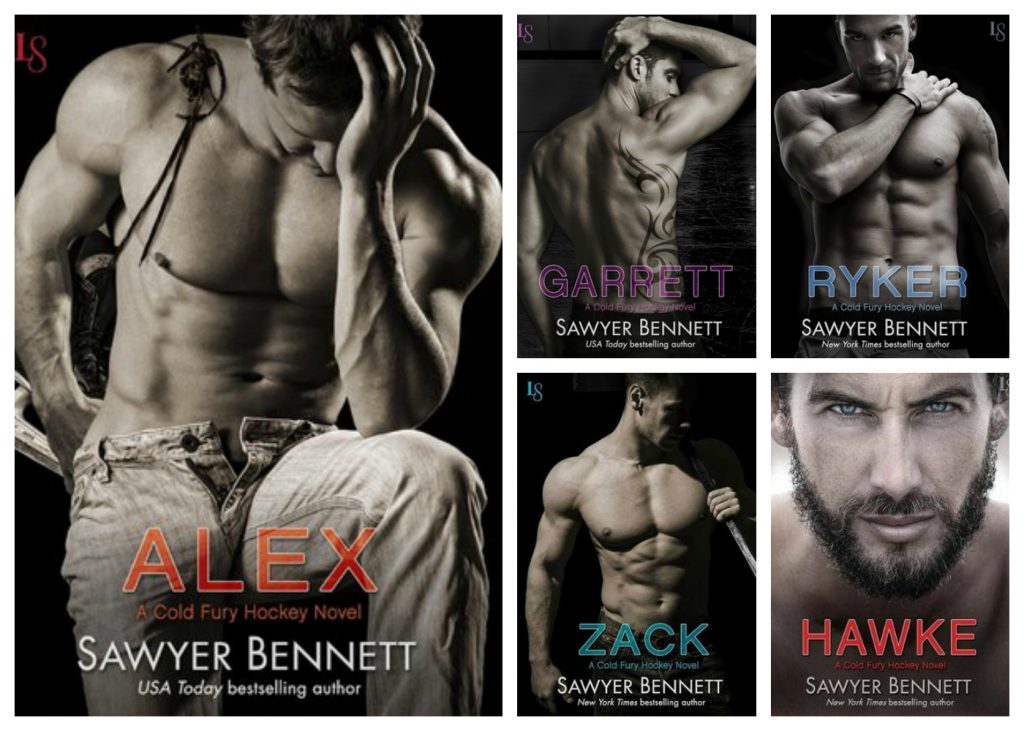 Love this series so much, I've already pre-ordered the December book (and the 2017 book – Roman!). A brilliant romance/hockey balance. Recommended.

Hockey star Alexander Crossman has a reputation as a cold-hearted player on and off the rink. Pushed into the sport by an alcoholic father, Alex isn't afraid to give fans the proverbial middle finger, relishing his role as the MVP they love to hate. Management, however, isn't so amused. Now Alex has a choice: fix his public image through community service or ride the bench. But Alex refuses to be molded into the Carolina Cold Fury poster boy . . . not even by a tempting redhead with killer curves.

As a social worker, Sutton Price is accustomed to difficult people–like Alex, who's been assigned to help her create a drug-abuse awareness program for at-risk youth as part of the team's effort to clean up his image. What she doesn't expect is the arrogant smirk from his perfect lips to stir her most heated fantasies. But Sutton isn't one to cross professional boundaries–and besides, Alex doesn't do relationships . . . or does he? The more she sees behind Alex's bad-boy facade, the more Sutton craves the man she uncovers.”

Garrett (Cold Fury Hockey #2)
Carolina Cold Fury star Garrett Samuelson never wants to miss out on a single minute of fun. Whether he’s playing hockey, hanging out with friends, or walking the red carpet with a new date on his arm, he lives every day to the fullest. When he meets Olivia Case, he sees someone who’s exactly his type—confident, sexy, smart . . . his next fling. But the more he pursues her, the more Garrett shares a side of himself that other women don’t normally get to see.

Olivia has been keeping a secret. While Garrett lives for the next thrill, Olivia’s not sure she’ll live to see the next day. She’s undergoing treatment for some serious medical issues, and she doesn’t have time for a relationship with no guarantees—especially one with a hot-as-sin womanizer who won’t take no for an answer. But as she gets to know the real Garrett, Olivia can’t help falling for him . . . hard. To reveal the truth would mean risking everything—but you can’t score without taking the tough shots.

Zack (Cold Fury Hockey #3)
Rising star Zack Grantham has been stuck in a downward spiral of grief ever since the car accident that left him a single dad and put his career on hold. Back on the road with the Carolina Cold Fury and still crippled by emotional baggage, he’s in need of some serious help with his son. But while the nerdy new nanny wins his son’s heart, Zack isn’t sure he’s ready for a woman’s touch—even after getting a glimpse of the killer curves she’s hiding under those baggy clothes.

Kate Francis usually keeps men like Zack at a distance. Though his athlete’s body is honed to perfection, he refuses to move on with his life—and besides, he’s her boss. Still, the sparks between them are undeniable, tempting Kate to turn their professional relationship into a personal one. But before she makes a power play for Zack’s wounded heart, Kate will have to open him up again and show him that love is worth the fight.

The stakes have never been higher for Carolina Cold Fury goalie Ryker Evans. With his contract running out, he’s got a year left to prove he’s still at the top of his game. And since his wife left him, Ryker has been balancing life as a pro-hockey star and a single parent to two daughters. Management is waiting for him to screw up. The fans are ready to pounce. Everybody’s taking dirty shots—except for the fiery redhead whose faith in Ryker gives him a fresh start.

As the league’s only female general manager, Gray Brannon has learned not to mix business with pleasure. And yet even this tough, talented career woman can’t help breaking her own rules as she gives Ryker everything she’s got. She hopes their hot streak will last forever, but with Ryker’s conniving ex plotting to reclaim her man, the pressure’s on Gray to step up and save a tender new love before it’s too late.

Hawke (Cold Fury Hockey #5)
The Carolina Cold Fury hockey team proves that love is a power play. As Sawyer Bennett’s New York Times bestselling series continues, the league’s most notorious party animal gets blindsided by the one that got away.

Off the ice, elite defenseman Hawke Therrien enjoys his fair share of booze and good times. And why shouldn’t he? He’s worked his way up from the minor leagues and made himself a star. The only thing Hawke misses from that life is the pierced, tattooed free spirit who broke his heart without so much as an explanation. She’s almost unrecognizable when she walks back into his life seven years later—except for the look in her eyes that feels like a punch to the gut.

Vale Campbell isn’t the same girl she was at twenty. As crazy as she was about Hawke, her reckless behavior and out-of-control drinking were starting to scare her. She had to clean up her act, and that would never happen with Hawke around. Cutting him loose was the hardest thing Vale ever had to do—until now. Because she’s still crazy about Hawke. And if he could ever learn to forgive her, they just might have a future together.

Max (Cold Fury Hockey #6) – coming Christmas 2016
The ice is a cold mistress. As the league’s most eligible goalie, Max Fournier has access to his fair share of willing puck bunnies, but right now he’s more interested in bringing home another championship than a one-night stand. A romantic at heart, Max believes in love; he’s just not great at relationships. So when he finally meets a nice girl who’s not blinded by his celebrity, he’s feeling the heat—and the pressure to save her from herself.

Between working two jobs and raising her sister’s kids, Julianne Bradley doesn’t have time for sports—or men. All she knows about Max is that he’s the sexiest customer to ever grace her gas-station counter. And he sees past her tired eyes and makes Jules yearn for things she can’t have: a glamorous fling, a passionate lover, and the time to enjoy both. Max makes her feel like Cinderella, even though Jules has enough baggage to crush a glass slipper. Luckily, he’s no prince—only a fierce competitor determined to win her heart.

Where to find RJ Scott