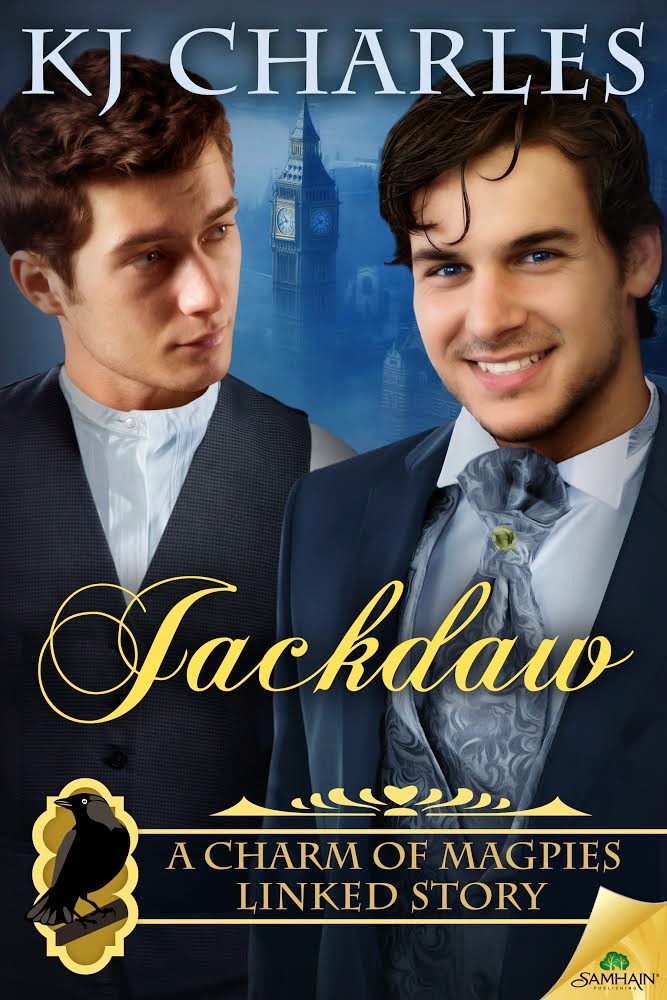 In my Charm of Magpies series, the hero Stephen is a magical law enforcer trying to keep a lid on magical crime in Victorian England. The last book, Flight of Magpies, shows Stephen under attack. An incredibly valuable gift from his lover Lord Crane is stolen, his apprentice is framed for the theft, and Crane’s life is put in terrible danger. All of this horribleness to poor Stephen is carried out by a minor villain, a ruthless, amoral, self-serving thief named Jonah Pastern, who changes sides whenever convenient…and who also abandoned his own lover, leaving him to go to gaol in his place.

The responses I had when I said I was going to write Jonah’s story included ‘WHAT?’, ‘That arsehole?’ and ‘Seriously?’ Author Elin Gregory described Jonah’s attack on Crane as “the most brutal thing in any of your stories … it’s going to take a bit for me to get past that”. And one of my beta readers on the MS expressed a strong desire to see Ben, Jonah’s unfortunate ex, “push the bastard off a roof”.

So how do you make an unreliable, maybe dangerous, certainly unrepentant villain into a hero that readers can believe in, who earns his own happy ending?

Well, here are my rules:

1) Play fair. If a character did bad things, he did bad things. No explaining away that the gun was never loaded, or all the people he assassinated were nasty so it was okay really.

2) Understand why. This is the most crucial thing in writing any antagonist or villain. Did he know what he was doing was bad, or did he justify it? What was his goal? How did he look himself in the mirror? Not caring, not letting himself think about it, seeing the world differently, telling himself the story a different way? Can the reader understand what drove him, even if she doesn’t agree?

3) His other half may grant him forgiveness in a spirit of love and mercy. The reader cannot be expected to. The story has to make him earn the reader’s trust, even if his lover doesn’t.

4) Even if the reader and the lover are prepared to forgive, what about the rest of the world? The relatives of the murderer’s victims, the people who were burgled, the outstanding warrants: there are consequences that have to be faced or escaped, but not handwaved away. If the assassin says he’s sorry and the FBI basically shrug and say, “No hard feelings,” his crimes might as well have been parking tickets.

5) Redemption can’t just work within the relationship. The serial killer who says “I won’t do it any more because I love you!” is clearly not a reformed character. The coward who risks himself, the killer who tries to save a life, the traitor who proves loyalty beyond any expectation: these are classic arcs because they show us people who’ve confronted their failings and tried to be better.

To sum up: For a villain to turn into a hero the reader can believe in, and trust after the book ends, the story needs to confront what he did, make the reader understand why, and show us both consequences and redemption.

A couple of examples at opposite ends of the spectrum, with spoilers for the Adrien English series and the Prosperity series:
Jake in the Adrien English books by Josh Lanyon is a pretty crappy person. He’s the love interest from the start of the series, there’s no turnaround on the reader there, but nevertheless, he cheats on Adrien (and on his girlfriend with Adrien), strings him along horribly, abandons him for a couple of years. But we know why (because he’s cripplingly closeted), we see his redemption when he saves Adrien at the price of the reputation he’s spent books screwing him over to protect, and by God he faces the consequences. Jake pays in full for everything, and learns from it. We can really believe in his redemption, and their HEA.

Milord in the Prosperity series by Alexis Hall takes ‘crappy person’ to a new level. He’s a brutal crime lord. Shackles confronts us with horrific cruelty, for which Milord is totally unrepentant. But we can see reasons for how warped he is in his terrible history, and more, we can see that the one good thing in his life is his lover, defrocked priest Reuben. It’s not that Milord tries to improve for Reuben. He doesn’t want to improve. He’s a genuinely bad person. But their bond is so intense and compelling that Milord is pulled towards being the man Reuben wants, and when he does come through with a decent act in Prosperity, it is spectacular. He is mostly unredeemed, there is no saintly turnaround, but the reader is left in no doubt of the rightness of their deeply odd relationship and Milord’s reluctant commitment to it. (If you haven’t read this series, RUN DO NOT WALK.)

And in the middle of the spectrum is my minor villain. Jonah had his reasons for what he did. He learns, in a hard school, the consequences of his acts, big and small. And he has the opportunity to confront his past failures. Whether what he does is enough to earn forgiveness for what he did…well, that’s up to Ben to decide. And, of course, the reader. Let me know how you get on.

If you stop running, you fall.

Jonah Pastern is a magician, a liar, a windwalker, a professional thief…and for six months, he was the love of police constable Ben Spenser’s life. Until his betrayal left Ben jailed, ruined, alone, and looking for revenge.

Ben is determined to make Jonah pay. But he can’t seem to forget what they once shared, and Jonah refuses to let him. Soon Ben is entangled in Jonah’s chaotic existence all over again, and they’re running together—from the police, the justiciary, and some dangerous people with a lethal grudge against them.

Threatened on all sides by betrayals, secrets, and the laws of the land, can they find a way to live and love before the past catches up with them?