When I was at the UK meet in 2014, I was told by readers on more than one occasion that they thought I just wrote paranormal, or I just wrote contemporary. Or that they knew about Texas, but had never heard of the Sanctuary series. So I came up with this idea… highlight two very different books, or series, and add in a prize and maybe readers might find something new from me.

Today I thought I would focus on the differences and similarities to two of my series. The Texas Series (6 books with a 7th coming this week) and The Sanctuary Series (7 books with an 8th coming November).

These two series are really different, as different as chalk and cheese on the surface. The Texas Series, begins with The Heart Of Texas, an 83,000 word soap story of drama and blackmail and murder, featuring playboy Riley and cowboy Jack. The series is all about family and love and is a contemporary story set against the background of issues like same sex marriage, adoption and surrogacy. There are bad guys, good guys, and some who straddle both worlds. 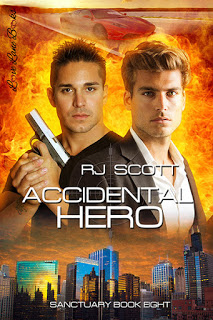 On the other side of the coin Sanctuary is a series set very much in the world of crime and danger. Sanctuary is a private organisation that steps in to protect anyone the FBI can’t look after. Good guys like Morgan, who is in book 1, who witnesses a murder but whose FBI safehouse is compromised. The story arc of a case runs through all seven books until the conclusion, but it is the relationship between operatives and the men they look after that is the main theme.

Texas – passion, lust, murder, and above all family : http://rjscott.co.uk/the-texas-series

Sanctuary – murder, betrayal, action, and above all focuses on the heroes in all of us. http://rjscott.co.uk/the-sanctuary-series

Originally posted with Prism Book Alliance, 2014, and updated for this post.