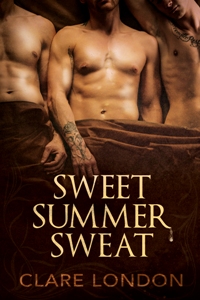 When you find a place where lust and sex rule life, and your every desire can be fulfilled, why would you ever want to leave?
Young runaway Scot and his boyfriend Jerry escape their deadbeat homes and families, hoping to leave prejudice behind them and travel to a new life in Las Vegas. Unprepared and naive, they're lost almost at once, and shelter at a run-down, deserted motel in the middle of the scorching hot Nevada desert. A place with secrets, run by staff both gorgeous and uninhibited, and driven by a mysterious sexual connection Scot’s never even dared to dream.
All but drugged by the lazy heat and the hedonism around him, Scot watches as Jerry is seduced away and realizes their relationship was nothing more than shared lust. Restless, Scot knows he wants true love and real understanding. Could he find it with the mysterious and elusive owner of the motel, Connor Maxwell? Connor seems to think so, every time he appears and pursues Scot for his own. But where does Connor come from? It seems the passion calls him into being at its own whim.
Eventually, what binds Connor and his friends to the motel may be too strong for Scot to break through. Scot has ambitions to travel, to make something of his life – but is his only option to embrace life at the motel in his true lover’s arms?
Or will that love be strong enough to release them both …

Clare London took her pen name from the city where she lives, loves, and writes. A lone, brave

female in a frenetic, testosterone-fuelled family home, she juggles her writing with her other day job as an accountant.

She’s written in many genres and across many settings, with award-winning novels and short stories published both online and in print. She says she likes variety in her writing while friends say she’s just fickle, but as long as both theories spawn good fiction, she’s happy. Most of her work features male/male romance and drama with a healthy serving of physical passion, as she enjoys both reading and writing about strong, sympathetic, and sexy characters.
Clare currently has several novels sulking at that tricky chapter three stage and plenty of other projects in mind… she just has to find out where she left them in that frenetic, testosterone-fuelled family home.
Clare loves to hear from readers, and you can contact her here:
Website: http://www.clarelondon.com
E-mail: clarelondon11@yahoo.co.uk
Blog: www.clarelondon.com/blog
Facebook: https://www.facebook.com/clarelondon
Twitter: https://twitter.com/clare_london
Goodreads: http://www.goodreads.com/clarelondon
Amazon: http://www.amazon.com/author/clarelondon/
Google+ : https://plus.google.com/u/0/+ClareLondon/posts

The gate to the courtyard creaked quietly. Suddenly the vision had gone, and Scot was alone there, his eyes acclimatizing to the dark and the barely-there whisper of sand around his feet. For a moment he swayed, trying to re-establish himself in the here and now.

If that was where he actually was.

He glanced back over his shoulder and, to his surprise, saw Jerry at the entrance, wavering at the open gate as if nervous of going any farther. Scot had some sympathy with that. Was Jerry here to meet Vincent after all? Scot waited for the ache of betrayal and hurt, but again to his surprise, he wasn’t as devastated as he thought he’d be.

Jerry padded into the courtyard, also barefoot, paused and ran a hand through his hair. He didn’t answer, didn’t even meet Scot’s gaze. It was as if he didn’t see him at all. “Where are you?” he whispered into the half-dark.

Some crappy choice for a secret assignation, Scot thought harshly. No fucking place to hide here. Even if Vincent was a skinny little man who could crouch behind the pool and avoid Scot’s investigation—

“Jerry,” said another voice. Deep and seductive and totally welcoming.

Scot whirled back around to face the pool. Vincent was there in front of him! He was as clear as he’d been in Scot’s weird half-dream, and dressed the same. He looked real. Solid. Sexy. And he was smiling over Scot’s shoulder, directly at Jerry.

“Vincent,” Jerry said, and smiled back.

Jesus. Scot had never heard such a simper in Jerry’s tone! Instinctively, he took a few steps back toward the perimeter wall so that he could look more easily between Jerry and Vincent and…

Oliver was there as well? How the fuck? Scot knew Oliver hadn’t been standing beside Vincent just two minutes ago, when Scot had been clinging to the pool wall and dreaming his weird, felt-so-real dream. But that’s where Oliver was now.

Scot stood, frozen, as Jerry walked past him.

“This is the first time,” Jerry said softly.

Vincent tilted his head to one side, a mischievous look on his face.

“So what do you think of me?” said another, new, but oh-so-fucking-not, voice.

Jerry’s laugh was astonishingly relaxed, like another, happier man’s, at least as far as Scot was concerned. “You’re hot,” he said, with humor in his tone. “Though I should have expected that.”

Scot watched with amazement as Connor stepped out from behind Vincent and took Jerry’s hand. They were all dressed the same as in the dream. As if they were just continuing it now, in front of Scot again. Scot recognized that smile on Connor’s face—he’d turned it on Scot in the kitchen the other day.

“But I think you do know me,” Connor said to Jerry.

“You know me,” Vincent murmured in Jerry’s ear, his hand sliding around Jerry’s waist. “So you know Connor too. You see how easy it is?”

Jerry blinked hard: Scot knew it was his what the fuck? face, but Jerry didn’t challenge Vincent or Connor. Instead he smiled again, sleepily, but with what looked a lot like hopeful anticipation. “Yes. Yes, I think I do.”

Jerry! Scot wanted to grab the man, shake him, shout into his face, demand to know what was going on. But… what was the point?

“What happens now?” Jerry asked. He arched gently as Vincent kissed his neck, still holding him close. Jerry’s gaze flickered between the three men, his pupils dilating. Never once did he look over to where Scot stood.

“A proper welcome this time,” Oliver said mischievously. “From all of us.”

Connor continued as if neither of the others had spoken. “I hoped you would come tonight. Come and join us.”

They took hold of Jerry, one on each arm, Vincent’s lips at his throat, and drew him nearer the pool.

And Jerry spun in their arms, laughing, and then they all vanished into nothing.