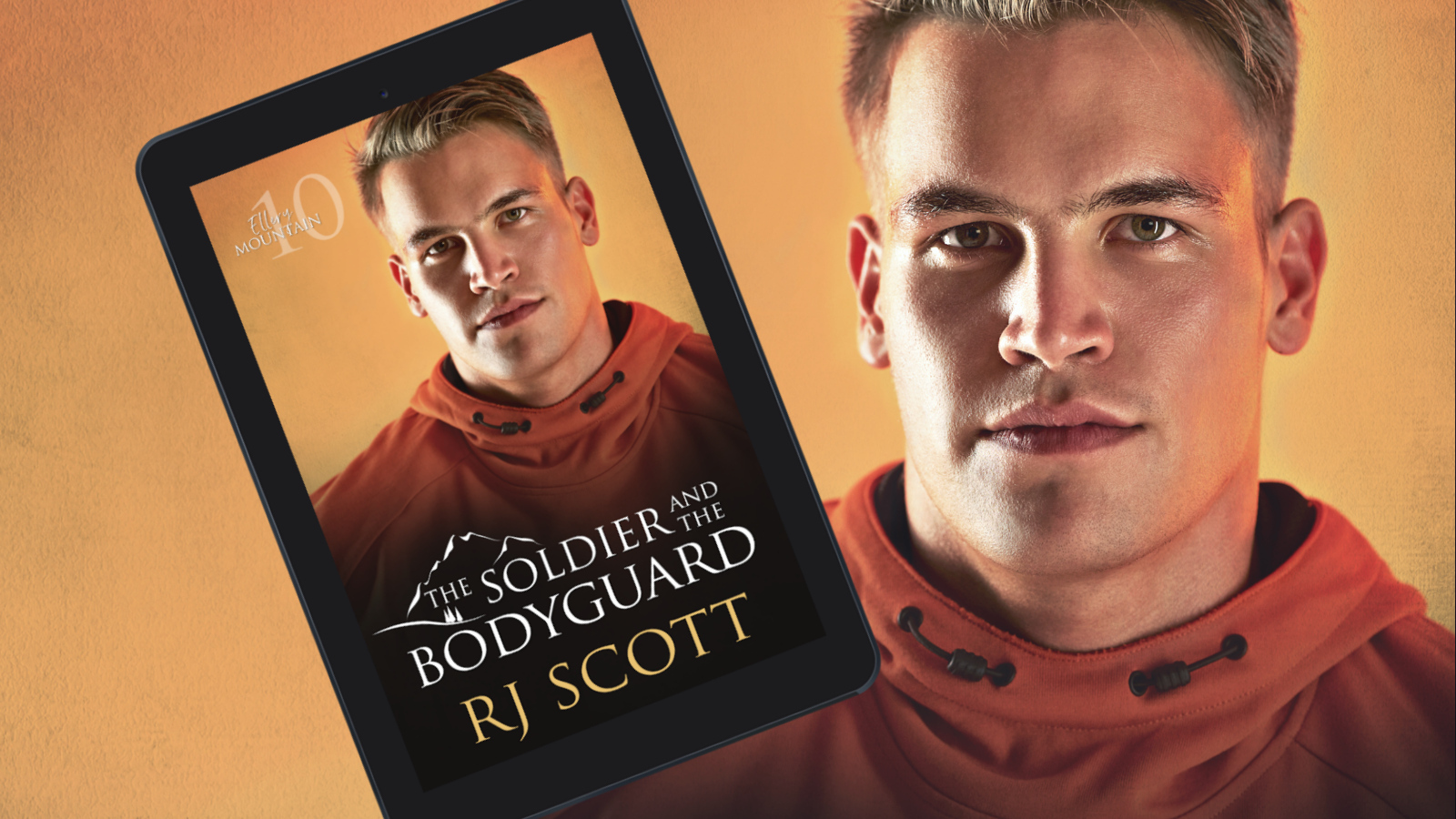 When things went wrong, they inevitably happened in threes. Or at least that was what my mom said, and I never argued with her. The time the washing machine chewed up her best blouse, followed by the egg pan running dry, along with a friend of a friend who found out her cousin’s friend had backed their car into a lamppost? That was all an example of the rule of three.

I’d grown up expecting this to be true, my brain immediately repeating my mom’s warning as soon as anything terrible happened.

Like the explosives in the box, currently in the middle of the enormous backyard of the house I’d rented for the team.

That was the first thing.

Finn, Ellery PD’s finest turning up with bomb squad in tow, that was two.

It made me think that the freaking box was going to explode, which would be the most dramatic third thing that had ever happened. There was a cordon, a small crowd that seemed to form out of nowhere, and then the third thing happened, and it was way more destructive than an explosion.

The paparazzi were at the gate of the Centre but thank fuck they couldn’t see what was going on in the house.

Only explosives, the bomb squad, authorities, and paparazzi added up to a lot more than three, and it was madness.

Chaos had landed right on the doorstep of the one place where there was supposed to be calm and peace. I didn’t know what to deal with first, apart from ushering JC back into the Center, with Grace at his side, along with the three other guests that didn’t need to see what was happening here. Daniel had gone with them, calm words on a litany from his mouth. I didn’t have to be an expert to see the horror in his expression when he first saw the chaos, and I knew with a heavy heart that JC’s safe place wasn’t going to be safe for much longer.

“How did we not stop this?” I asked Eddie, but he glanced at me and, after a moment, handed me his phone. As a former federal agent, he knew all the crazy that happened in this world, and wounded vulnerable veteran or not, JC was also from money and celebrity. The phone screen went blank, and I had to get him to access whatever he was trying to show me, but when I took it back, I wished he’d just left that shit locked away. It wasn’t a photo of a threat. It wasn’t anything to do with the IED that was currently within a cordon and a long way from us, with cops and bomb experts in debate just outside the danger area as well. It wasn’t a message from some stalker who thought JC should love them or someone who wanted his family’s money.

It was JC’s goddamned parents who’d poured fuel on the fire.

‘How tragedy has made our love stronger’ was the headline. A-List Actor McKenzie Baker and his model wife, Felicia, daughter of Governor Lewis, have explained that the horror of seeing their veteran son locked away in a retreat in rural Tennessee has saved their marriage. Click here for more.

I had to re-read the clickbait headline. Then the introduction, and I hovered over the more part. Neither of them had visited JC—hell, neither of them cared about JC or the hell he was in right now. And how could a non-existent visit impact their marriage? The fuck.

“You need to read the whole thing,” Eddie said. “Then you need to get the fuck inside and pack so we can move on to a safer place for JC and everyone here. The last thing these guys need is this kind of chaos on their doorstep. Look, Adrian, I have an old FBI friend who could maybe help. You want me to call him?”

I glanced up from the screen to Eddie and back again, still stuck on the fact JC’s parents had revealed where he was and lied to use him as nothing more than a way to get attention. I was sick, horrified, but somehow I wasn’t surprised.

When I next see them, I will kill them.

“Why would they do this to him?”

“They’re sick in the head. No better than JC’s stalkers.”

I finally clicked more. The photo that came up was of JC’s parents, her in the front leaning back on him, a poster for his movie on the wall behind them. She was wearing nothing but a sheer top and loose silk pants, and he was topless and in board shorts. It was going for sexy—but they’d sold out their son, and all I could see was crass vulgarity in the social media shit. I scrolled to the date and time—the post was only thirty minutes old, not long enough for the paparazzi—some of whom I recognized—to get here. I didn’t even have to ask Eddie, who inclined his head to the closed gate.

“Some publicity firm told the vultures where to find JC—gave them an eight-hour head start on the article.”

I straightened then, every inch the soldier ready to go out and sort shit out. “Which one?”

“I’m guessing whichever one is handling promo for the new movie, or maybe for the model? Fuck knows. But believe me, we will track them down in the next few minutes. George is already on it.”

I had two fires to deal with now, the assholes at the gate, the bomb, but both came with one overriding issue. JC. My brain looped back to the idea that someone could help JC, someone that Eddie knew.

“Who do you know? What are you suggesting?”

“A private foundation, Sanctuary, they have safe houses for witnesses, off the grid, I could see if they have on empty, we could pay them to—”

“Do it,” I interrupted because JC being here was putting him in danger, but even worse, it was a danger to every single veteran here who’d already seen too much. “You take the paparazzi. I’ll deal with the cops, then as soon as we’re clear, we’re hitting the road.”

“I already got drone footage of the exit through the ranch with the horses.”

“Deal with the paparazzi, get our stuff together. We’ll leave George and Grace here, get George to put a team together to protect the Center. Get it now.” I pressed a hand to my temple, a headache threatening to derail everything.

“Already in process. I’ll meet you at the ranch.”

“And I’ll get JC over there as soon as I can. We’ll head across the field.”

“You got this?” he gestured to the bomb, and I wished I’d pulled in a bigger team from the start. All I wanted was to go and find JC and hold him tight, not deal with this shit right now.

The time until the bomb squad gave us the all-clear seemed to take forever—the paparazzi had been encouraged to move on, Finn’s cop car parked right by them was enough to back up the threats that I am sure Eddie handed out. As it grew dark, the gate was clear, but I wasn’t naive enough to imagine they’d all left—I’d seen them do some crazy shit to get a photo of JC, and the only time he’d been safe from them was when he was overseas fighting for his country.

With the bomb squad gone, a car arriving with people that George had called in—all of whom looked capable of stopping any threat to the Center—I was finally able to find JC.

But it was Daniel waiting for me inside the door.

“We’re going. I’m sorry.” And I was so damn sorry this trouble had followed us here.

“Where will you go?”

“Plenty of options,” I lied.

“I wish I could have JC can stay, but it’s the rest of the guests having to deal with this chaos and the way it triggers them—”

“I promise you that I get it. Did JC see the article yet?”

Daniel frowned. “He’s in the craft area painting and pretending nothing is happening. I don’t imagine he’s seen anything. What article?”

“His parents were the ones who revealed where he was.” I extended a hand which Daniel took. “We owe you so much.” He seemed as devastated as I felt. “We’ll be gone in less than an hour.”

“You don’t have to go right away—”

“Yeah, we do. There’s a team at the house we rented, they’ll stay here, out of sight, in case there’s anything else, but you won’t know they’re there.”

I moved past him, heading for JC, only breathing easily when I found him, his hands covered in yellow paint and a flowerpot with giant sunflowers on the side.

“Hey,” I said after I moved to where he could see me.

He looked up, his eyes bright with fear. “Adrian?”

“We have to go. You want to come and help me pack.”

He stood with my help and moved quickly into my hold, yellow paint smearing on my jacket. “Both of us?”

That was what worried him? “You’re never going anywhere without me.”

He cuddled into me, and I didn’t want to let him go–but I had to if we were going to pack and get over to the ranch.

He pulled back from me and forced a smile. “Sure.”

Next chapter in my newsletter each Monday