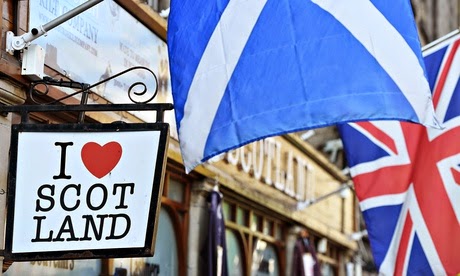 I watched Panorama – Scotland's Decision when it was aired a few nights back. I can't get it out of my head. I don't watch all the political posturing or the news reports, I'm not a person who enjoys all the crap that surround politics.

But I do like shows that try to explain why things are happening, with historical fact, and I like to hear from people in the street. An awful lot of the show made sense, and it analysed the shattering of  industrial connection and the creation of a new kind of isolation. It spoke of post WWII and the Thatcher years and oil. It was some things I knew, some I didn't.

I don't want Scotland to leave, but that program I watched is nagging at me. I just abruptly feel so sad about the whole situation but I am not educated enough in the facts to really comment or defend why I don't want Scotland to leave. So please don't expect me to. I never thought it would bother me. Honestly, like my support of equality, I just want everyone to be happy, and every person should be able to decide their future. Then I watched the show (and B is off to Uni which means I'm emotional).

Abruptly I realised I did have an opinion, I wanted the No vote to win, but I wanted the win to be used to make things better for Scotland, and for the Union.

As I watched the show I came to understand one thing, I think something in us has broken, and I think it isn't just English & Scottish. I feel it's much wider than that, worldwide, something broken in society and in all of us, and for that I feel very sad. Scotland and England, Wales and NI, together we were strong, we are strong, I hate that the very concept of it is being broken.

I hope the voting tomorrow is peaceful and considered. I would love to say that if the vote is No that there won't be gloating or anger, and that if the vote is Yes, that neither nation will do anything stupid and shortsighted (I'm looking at England and the idiots with their rhetoric here – this isn't a reality show, this is real life).

And that either way we can begin to fix some of the broken bits in all of us and become one nation again, for real.