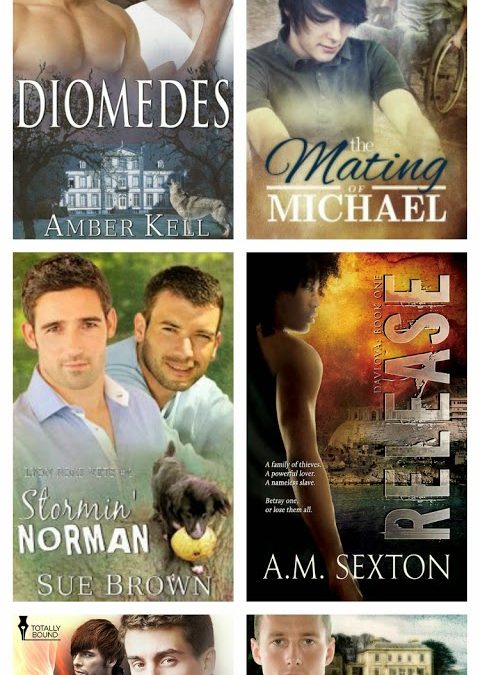 Round up of news from some of my favourite authors…

Amber has a cover reveal and http://amberkell.wordpress.com/ has updated her blog story (unlike me L ) and has news on a new release called Diomedes.
When Diomedes Stollen learns his mother is trying to take over the world he does what any self-respecting demon-vampire would do, he makes a pact with the local werewolf alpha. Or at least he tries, but first he has to clear up a minor kidnapping issue.

Varick Taylor leads one of the largest packs in the city, but when a beautiful man has him stolen from his home he doesn’t know what to do. Luckily his inner wolf is more than happy to claim Dio as his mate.

A demon mother, a vampire father-in-law, and dozens of tiny demons add to the mix as two completely different people try to figure out how to combine their abilities while saving the world.

Meredith Russell http://meredithrussellart.blogspot.co.uk/ – has a new book coming from Love Lane Books in the Summer called Alter Ego which is a gorgeous book set in England, and has created wonderful new cover art for so many authors that I don’t know which one to pick. So I killed two birds with one stone and chose Diomedes to keep her and Amber happy! ROFL.

Marie Sexton has an awesome and very different book out and the news for *Release* is on her blog – http://mariesexton.net/ –

Davlova: a poverty-ridden city-state ruled by a tyrannical upper class. Resources are scarce and technology is illegal. But in the slums, revolution is brewing.
Misha is a common pickpocket until his boss gives him a new job. Disguised as a whore, Misha is sent to work for one of the most powerful men in the city. But his real task is far more dangerous: get close to Miguel Donato, and find something – anything – that will help topple Davlova’s corrupt government.

Misha is plunged into the decadent world of the upper class, where slaves are common and even the most perverse pleasure can be found. Although he’s sure Davlova’s elite is involved in something horrific, proof is hard to come by, and Misha begins to fall in love with the man he’s supposed to betray. Then Misha meets Ayo – a sex slave forced by the neural implant in his brain to take pleasure from pain – and everything changes. As the lower class pushes toward a bloody revolution, Misha will find himself caught between his surprising feelings for Donato, his obligations to his clan, and his determination to save Ayo

Chris Quinton has a new release, Greymalkin, and she blogs and has an excerpt here: http://chrisquintonwriter.blogspot.co.uk/2014/06/greymalkin-melusine-and-me-and-excerpt.html

Garrett Leigh
Garrett Leigh opened herself up a huge can of worms asking people to *ask her questions*… she got asked so many she had to merge some of them into a longer answer! Go see them here: http://garrettleigh.com/blog-posts/

Mas from Junk gets his man in the eagerly awaited second book in the Bristol Collection. Lewis and Jasper also put in a few appearances in this lighthearted contemporary romance.

Kay Berrisford has joined Love Lane Books and will have a new release out shortly *squee*. She is also interviewing other authors on her blog: http://kayberrisford.com/

SA Meade has a new book out from Totally Bound, Darkness at Endersley follows the story of Josh and more information can be found here: https://www.goodreads.com/book/show/22074646-darkness-at-endersley This is next on my to read list as I loved book 1!


Joshua thought he’d left his past behind, but there’s something in the darkness at Endersley.

Joshua Endersley is glad to leave a broken engagement and his sordid desires behind in London and claim his inheritance on the rolling downs of Wiltshire. What he doesn’t need is temptation in the form of artist, Daniel Wyndham, to remind him of all he wanted to forget.

Joshua finds Daniel impossible to resist and the two men embark on a passionate affair that draws them ever closer. Joshua believes that he can find happiness and live his life the way he wants to in the peace and seclusion of Endersley.

But nothing good can last forever. The very remoteness and solitude that Joshua loves about Endersley turns against him—the darkness at Endersley is deeper and more dangerous than he could have ever imagined.

Sometimes there are awesome perks to being a writer with writery-type friends. I read Eli Easton’s *The Mating Of Michael* a few weeks back and all I can say is that it is another highly recommended book. Loved it so much and it’s out on 30 June (only three more days!). There is an excerpt here: http://elieaston.com/

Everyone admires Michael Lamont for being a nurse, but his part-time work as a gay sex surrogate not only raises eyebrows, it's cost him relationships. Michael is small, beautiful, and dedicated to working with people who need him. But what he really wants is a love of his own. He spends most of his spare time reading science fiction, especially books written by his favorite author and long-time crush, the mysteriously reclusive J.C. Guise.

James Gallway’s life is slowly but inexorably sliding downhill. He wrote a best-selling science fiction novel at the tender age of eighteen, while bedridden with complications of polio. But by twenty-eight, he's lost his inspiration and his will to live. His sales from his J.C. Guise books have been in decline for years. Wheelchair bound, James has isolated himself, convinced he is unlovable. When he is forced to do a book signing and meets Michael Lamont, he can’t believe a guy who looks like Michael could be interested in a man like him.

Michael and James are made for each other. But they must let go of stubbornness to see that life finds a way and love has no limitations.

Talking of getting books early, when Jordan L Hawk said would I like to read her latest SPECTR book a month early… what did you think I said… ROFL… let’s just say it’s another recommended-read from me and if you haven’t read Jordan yet they I can only say this… you should… ROFL… Also, Necropolis – Whyborne & Griffin No. 4 is available – love my boys! More news here: http://jordanlhawk.com/

Federal exorcist John Starkweather’s life is in tatters. His best friend Sean betrayed him. SPECTR, the agency he viewed more as a surrogate family than an employer, wants him dead. His only allies are members of the mysterious organization called the Vigilant, whose motives remain in question.

The only thing keeping John together is the presence of his lovers: Caleb Jansen, a powerful telekinetic, and Gray, the vampire spirit possessing Caleb.

Together, they must not only evade capture, but somehow stop SPECTR from building an army of demon possessed soldiers. If they are to succeed, John must question everything he’s ever believed about SPECTR and spirits. And Caleb and Gray must decide how far they’re willing to go—not just for John’s love, but for his very life.

Sue Brown is writing a series for Love Lane Books *YAY*… think werewolves and ranches… so exciting. She also recently released book 4 in her Lyon Road Vets series https://www.goodreads.com/book/show/22294872-stormin-norman 4.5/5 and my favourite of the series so far.

Dan had been Jesse’s partner for many years, and always there for Jesse on his return from difficult assignments. However, after breaking his promise not to leave again, Jesse learns to his cost that Dan can be pushed too far. When he returns home, broken in body and spirit, Jesse finds his house empty and Dan in the arms of someone else.

To fill his life, Jesse decides to get a dog. His friends and neighbours take him to choose a puppy. What he doesn’t expect is for Norman to choose him. As Jesse takes on a new job, with Norman’s assistance, he realises that Dan isn’t far away, and he still loves him. Dan has moved on with his life. Can Jesse do the same?

Kj Charles had awesome news, she is now a full time writer, which means I get to read more books from her, so it’s a win:win situation… rofl… she has a new book out but sadly I haven’t made it to her list of pre-sends so I am at this moment sicking Jordan on her and getting Jordan to tell her how awesome I am… ROFL… more news from her http://kjcharleswriter.wordpress.com/

Think of England is her new book

Lie back and think of England…

England, 1904. Two years ago, Captain Archie Curtis lost his friends, fingers, and future to a terrible military accident. Alone, purposeless and angry, Curtis is determined to discover if he and his comrades were the victims of fate, or of sabotage.

Curtis’s search takes him to an isolated, ultra-modern country house, where he meets and instantly clashes with fellow guest Daniel da Silva. Effete, decadent, foreign, and all-too-obviously queer, the sophisticated poet is everything the straightforward British officer fears and distrusts.

As events unfold, Curtis realizes that Daniel has his own secret intentions. And there’s something else they share—a mounting sexual tension that leaves Curtis reeling.

As the house party’s elegant facade cracks to reveal treachery, blackmail and murder, Curtis finds himself needing clever, dark-eyed Daniel as he has never needed a man before…

Who is my kind of hero?