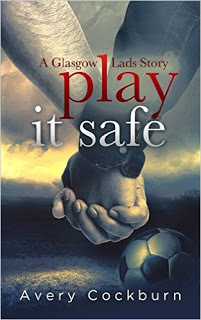 Find the rest of the series here.

Blurb: After living together for three months, Fergus Taylor and John Burns have come to love each other’s quirks, and the bond between them is starting to look permanent. But when John wants to take things to the next level, Fergus balks, haunted by the betrayals in his own past.

John knows if he’s not careful, he could lose Fergus. If only he weren’t so bad at being careful.

To overcome his fears, Fergus must embark on an epic journey, a journey that will test his faith, his trust, and his ability to keep a cool head in a hot, hot place.

Note: Play It Safe features the heroes of Playing for Keeps, but like all Glasgow Lads books, it may be read as a stand-alone story.

Review: I've been waiting SO LONG for this book… at least a year (well it felt like that way even if it was only a few months LOL).

Awww, Liam and Rab, what can I say. I've been waiting for them, and I wasn't disappointed. If you are a fan of the Glasgow Lads series then you need to read this as soon as you can, and if you haven't read them before then see all my reviews and I promise you will love the stories!


In the shower, they didn’t speak. There seemed nothing to say, nothing even to think.

After they dried off—haltingly, between kisses—Liam looped his towel around Robert’s waist. “Now that I’ve got you clean,” he said, reaching back to open the bathroom door, “I mean to get you pure filthy.” He towed Robert out into the hotel room and guided him toward the near bed. “Lie on your stomach.”