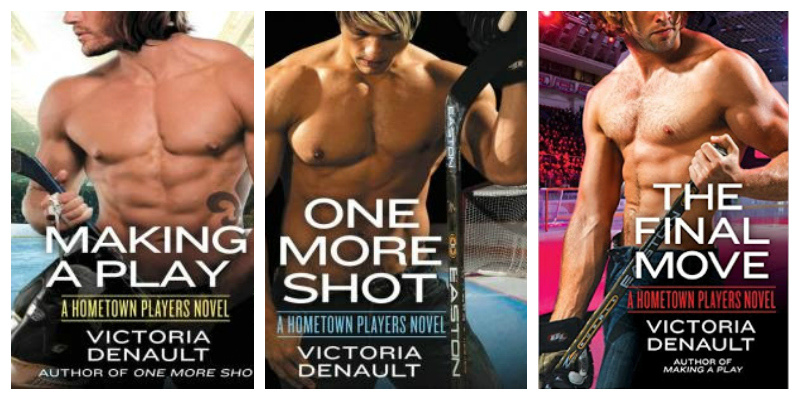 He'll do whatever it takes to win—on and off the ice.


Luc Richard is the hottest player in the NHL—and it has nothing to do with hockey. His racy relationship with his supermodel ex set the tabloids on fire but nearly put his career on ice. To avoid being traded, Luc agrees to take a break from the spotlight—and from women—and spend the off-season at home in Silver Bay, Maine. It's the perfect plan… until he reconnects with Rose.
Rose Caplan is tired of being shy, sweet, and safe. She's ready for passion, romance—and Luc. Having loved him longer than she can remember, she's finally ready to prove she's not the same innocent little girl he once knew. Off the ice Luc doesn't do games, but this new Rose makes him feel like playing a little dirty. If he's really got a shot at her heart then he's not just playing to win. He's playing for keeps.
One More Shot

They say you only get one shot at making your dreams come true.

Jordan is determined to take two.
Drafted by the NHL at eighteen, Jordan Garrison was headed for fame, and there was only one person he wanted to share it with-Jessie Caplan. He was crazy in love with her, and had finally told her so. They shared an amazing night . . . and then everything fell apart.
Jessie tries not to think about the night she gave herself to Jordan-or how he broke her heart. She tries not to think about it, but she does. Especially now, when she's staring into his sky-blue eyes for the first time in six years. After so much time and torment, she can't tell if she loves him or hates him. But Jordan has learned enough to know a connection like theirs is rare. He was lucky to find Jessie once. No way will he lose her again.
The Final Move

Hockey legend Devin Garrison thought he blew his shot. But his relationship with Callie Caplan just went into overtime.
Sexy, rich, and one of the biggest stars in the NHL, Devin Garrison has always been the one who had it all. That is until his marriage falls apart and he realizes he has to start over. If he's honest, there has only been one woman who ever really excited him-Callie Caplan. They shared a night that was hotter than the late-summer sun, but in an instant-Callie was gone, pretending it never happened.

Callie Caplan isn't the wild child people think she is. It's true she's avoided relationships, but only because she's seen how crazy love can be. And her messy, imperfect life is crazy enough without opening her heart to a man-even one as picture perfect as Devin. But when fate brings them back together-just as they need each other most-Devin is determined to convince Callie that what she's feeling is real. And this final play may be their chance at forever . . .

Review: A brilliant series of books. Can't wait for book 4.