NR Walker writing a Christmas themed book is the best way to start my Christmas reading… two well-crafted characters, a hot and steamy connection, and backstories that I loved. Highly recommended to add to your Christmas reading list 🙂 5*

:: Can be read as a standalone story with absolutely no issues. ::

Industrial-art student Leif Caldwell and his best friend win tickets to the hottest party in town, the annual masquerade Christmas gala at the upmarket nightclub, Evoque. Not a gig they could ever afford to attend or buy costumes for, so Leif makes their masks. Given the holiday theme and the play on words, he makes a set of striking reindeer antlers and intends to have the night of his life.

Vintage Ridge's resident millionaire and owner of Evoque, Russ Quarrington, hates the holiday season because it reminds him of everything he's lost. All the money and success in the world can't fill the void in his heart, and this year he's particularly bereft. With the gala looming, his personal assistant insists Russ attends and that he wear a mask that offers anonymity, and hopefully find some festive cheer. Bored with the guys in town and tired of men only wanting him for his money, he reluctantly agrees.

But when Russ sees a mysterious man with a magnificent reindeer antlers and mask, he's instantly intrigued. Even when their masks are removed, Leif has no idea who Russ really is, and what Russ discovers is a man who understands him. And for the first time ever, a man who doesn't want what Russ has. This time, it's Russ who wants what Leif has, what money can't buy.

Russ and Leif are about to learn that sometimes Reindeer Games are the only games worth playing. 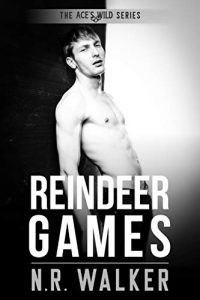