This week's snippet is from Last Marine Standing (Heroes #2).

Sam lifted reddened eyes to Mac, and there were so many questions in them. Mac stared at him for the longest time and saw Sam’s misery abate a little. He couldn’t help the smile he gave. But he could help the instant shock when Sam moved that little bit closer and kissed Mac full on the mouth. Mac reared back and heard the yelp of pain as Sam lost his support and grabbed at Mac. 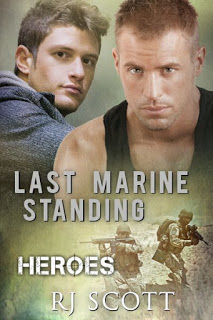 Former Marine Recon, Mackenzie ‘Mac’ Jackson has secrets. The things he did for his country, the things he saw, must never be spoken about. Until that is, his team is targeted.

A shift in political alliances means one particular mission undertaken by Mac and his Fire Team needs to be wiped from the history books. Starting with the team itself.

Forest Ranger, Samuel Larson wants to find the Marines who saved his life. He just wants to say thank you. What he can’t know is that he's walking into a firestorm of betrayal and murder.

When Samuel arrives at Mac's place he throws Mac's plans for hiding out of the window. Abruptly Mac has to protect a man that threatens his heart, only this time he can't be sure he will succeed in keeping Sam alive.