This week's snippet is from Changing Lines (Harrisburg Railers #1) written with V.L Locey. Mads is having a heart to heart with his son Ryker (who will have his own book in Feb next year).

“Start from the beginning Ry,” I said in my best gentle voice, which wasn’t difficult, as the temper I’d had going on with Ev had vanished as soon as my son wanted me to comfort him.

“I told him I’d talked to you, and he said you knew nothing, that you were used up and finished, and I shouted at him, and he threatened mom, said she was weak, and it scared me, and then he said he was picking me up from yours place because whether I liked it or not I had a meeting with an agent, and now I don’t know what to do.”

To me, it sounded like Ryker was close to hyperventilating. I gently eased him away and wriggled back so there was room between us. He had been crying, his skin flushed and his eyes red. “What do you want to do?” I asked gently. 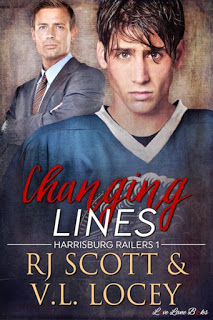 Jared Madsen’s hockey career was cut short by a fault in his heart, but coaching keeps him close to the game. When Ten is traded to the team, his carefully organized world is thrown into chaos. Nine years younger and his best friend’s brother, he knows Ten is strictly off-limits, but as soon as he sees Ten’s moves, on and off the ice, he knows his heart could get him into trouble again.