This weekend is the Angels and Sirens book signing in Pittsburgh and my first real life meeting with my co-author V.L. Locey so it seems fitting that this week's Rainbow Snippet is from our first book together, Changing Lines (Harrisburg Railers #1).

Mads blinked… then leaned in to press his lips to mine. It was a chaste kiss, but it nearly knocked me backward off the bench. His lips were soft but firm, like he was determined there would be no tongues. As soon as my brain touched on tongues, he sprang up from the bench as if he’d sat on a hornet. I heard him kick over his glass of water, but that was the last of my concerns.

“That was not supposed to happen,” he coughed as he aimed himself at my door. 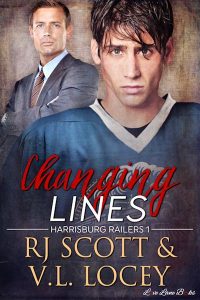