Deacon had twelve years on twenty-three year old Rafe, and even as he looked up at Deacon with soft eyes Deacon could see the man that Rafe would become.

“Your dad wouldn’t want you hurt like this,” Deacon murmured.
“You didn’t know my dad, you wouldn’t know what he wanted for me.”
“I know his son well enough to understand what kind of man he had to have been. You’re nothing like your Uncle and cousins.”
Rafe’s breath hitched.
“You don’t know me at all.”
~♡~♡~♡~♡~♡~♡~ 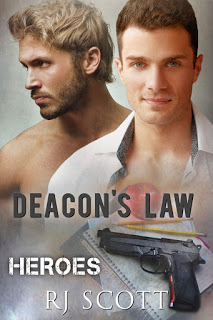 Undercover cop Deacon Shepherd lost everything trying to maintain his cover – the man he loved and the future he craved. He walked away and never looked back because it was the only way to keep Rafael alive.

The last thing he needs is to be dragged back in that world, but an attempt on Rafael's life is enough to make him risk his heart again.

Rafael ‘Rafe' Ramirez wakes up in hospital, the victim of a hit and run. He’s stunned when the first face he sees is that of the man who betrayed him and left him for dead three years before. Witness protection had stripped Rafe of his family and friends and now it seems his sacrifice to bring his Uncle to justice was for nothing.

Someone wants Rafe dead and the only way he can stay alive is to go with the murdering drug dealer who broke his heart. But how can he ever trust Deacon, and how can Deacon protect Rafe without falling in love all over again?