My snippet this week is from my latest release, The Sinner & The Saint, book 8 in the Ellery Mountain Series.

“Hands where I can see them,” someone shouted, and Nick, startled, his heart pounding, fell backwards into the bathroom, catching himself on the jamb as best he could. He blinked to focus on the man in front of him.

The cop holding a gun on him. Immediately he raised his hands, and then lowered them to cover his junk, and then raised them again when the cop didn’t move. 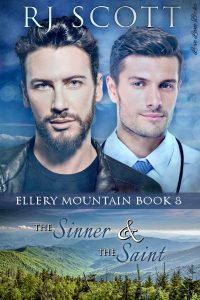 Army medic Ben Rockwell is in Ellery to work with the Veterans Center creating a new specialist unit for post trauma care. Desperate to make amends for battlefield decisions he regrets, he is focused on the unit and nothing else. Until some stranger moves in next door and throws him a curveball. He’s no hero, even though everyone says he is, and the lies burn inside him.

Leaving drama and chaos in his wake, Nicholas Merrick fled London and is hiding out in his friend Jason’s house, until everything back home dies a death. The choices he made in his life were to keep his best friend safe, but as a result everyone sees him as the bad guy.

When these two meet, the attraction is instant. Can they ever be their true selves, and find love as a result?