My snippet this week is from Moments.

He saw the immaturity in his writing, he felt the weight of the words heavy on his shoulders, and it was bad. Carefully, he gathered up the loose pages that detailed all the lies that he had told himself. He filed away all the hate and angst that justified his awful treatment of people in his life.

He gathered them to him, clutching them protectively, then bundled them in a loose pile in his bag. After that, he laid on his stomach on his bed, buried his face in the soft pillows, shut his eyes so tight his face hurt, and cried like a newborn—hot, hurting, soundless tears that wrenched from his heart and tore through his head.

Such an idiot, such a fucking idiot. 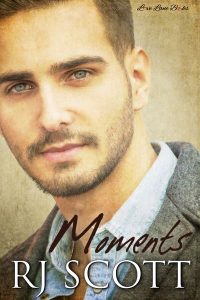 The Book -OUT NOW

An actor on possession charges, hell bent on destroying his own life, meets a man who quietly works to make the world a better place.

Jacob Riley is a typical Hollywood former child star with issues. He has already done prison time and at the age of twenty-six has been arrested again.

Ethan Myers is the owner and manager of Macs, an education center providing teaching and learning to local low income families. Losing his partner to cancer leaves him lost and alone and he buries himself in his work to start to mend his broken heart.

Sparks fly when Jacob has to complete his community service at Macs. Their relationship grows against a background of disenfranchised street gang members, arson, the Oscars, and despite their prejudices.

Can Jacob Riley be saved?