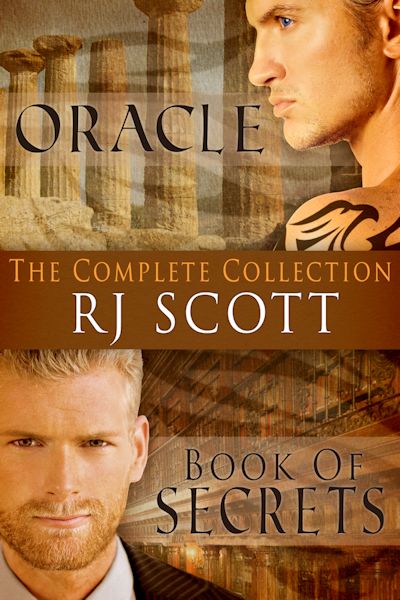 Love, adventure, an empath & an ancient relic that could destroy the world.
Alex Sheridan is a thief, able to steal even the hardest to reach antiquities. Luke MacKinnon is a professor of ancient languages. When they come together to locate the Oracle, it is because both men have targets on their backs. Can love blossom when each day could be their last? And, how can they survive the evil that wants the Oracle?

Kidnapping, adventure, drama and the fight for eternal life.Alex is making good on his promise to put things right; retrieving items he had stolen, and returning them to their rightful owners. It's dangerous work, especially since he lost his most useful Oracle-given powers.
When Luke is kidnapped by a man intent on finding the secrets to eternal life, Alex has to make a bargain with the devil and steal an item from the private library at Windsor Castle. Will Alex be too late to save the man he loves?

Reviews for The Complete Collection

Multitaskingmommas Book Reviews – 4.5/5 – “…. This is a fantastical read and the complexity confounds at times but keeps on going. One missed page and the whole plot falls around the reader so let this be a WARNING! Do not skip pages. Read each word and stamp it to memory. There are two books here and what happens in the first will affect the second. Strangely enough, what happens in the second, affect the recollection of the first.

Oracle. A different RJ Scott in its mysticism and strangeness but the stamp of romance and heart throbbing moments, they're all there.

Rainbow Book Reviews – “….Using an existing legend like the Oracle of Delphi and re-interpreting it with a paranormal angle, giving it a modern slant, and adding characters I cared for from the very beginning made this story a joy for me to read. The balance between action/adventure and romance is really good, letting both parts of the story shine. If you like mystery and intrigue in your romances, if you enjoy a plotline that will keep you in suspense, and if you prefer to read about characters who are real and human in their reactions, then you will probably enjoy this books as much as I did. Bring on the sequel, RJ!…”

Top 2 Bottom Reviews – 4/5
– “….The book explores the concept of life and relationships controlled by fate and how life is directed when destiny, rather than free will, controls the paths taken. From the introduction to the conclusion, the plot held my attention with a blend of romance, suspense, conflict, and action. The climax of the story and its resolution were emotionally satisfying and well developed. The story, as a whole, was well paced and tautly written….”

Boy Meets Boy Reviews – 4/5
– “….This was what was fun about this story, some really good adventure but not so much action that you’re dragged away from the romance or the mystery, the elements were balanced well….

….I’ll definitely be reading Book of Secrets, the continuation of the story and would highly recommend Oracle, it was a great read I really enjoyed….”

Hearts on Fire Reviews – 5/5
– This was a great read with likable characters and a good pace. Alex Sheridan is a thief with paranormal abilities but no memory of his youth before age 7. He was washed up on the shores of Greece with scars carved into his body, which he later had covered with tattoos along the lines of the scars. Luke McKinnon is a linguistic scholar hired to interpret ancient Greek scrolls in an an attempt to discover the Oracle at Delphi. When he meets Alex with his tattooed scars and abilities their lives become intertwined with  the help of the gods. I recommend this book to anyone with an open mind.

Reviews for Book of Secrets

Hearts on Fire Reviews – 5/5
– “….I got the HEA ending with just enough mischief to make this story a highly entertaining read.  I recommend it highly to any paranormal fan.  If you missed Oracle, now is the time to pick up both books and lose yourself for a weekend….”

MM Good Book Reviews – 4/5 – “….
Having Alex’s powers come back gradually was a well thought out plot and to have it woven into an impossible theft was exciting and very interesting. Linking Luke into the mystery was brilliant and adding a figure from Alex’s past was an added bonus. … I have to recommend this to those who love the mystical  and the magical, some great action, a touch of angst and a very happy ending in unusual circumstances…..”

Rainbow Book Reviews –
“….As a sequel, this is a great book because it picked up on the characters and their stories, and answered many of the questions I had at the end of the first book. But I think it would work even as a standalone story, with enough riddles, quirky characters, and grand mysteries to keep me entertained…..”

Literary Nymphs Reviews – 4/5 – “….Then there’s the theft at Windsor Castle. It’s pretty obvious
Ms. Scott did a great deal of research about its history and layout and the same goes for DaVinci’s works. It’s all nicely integrated into the plot and adds a nice sense of realism. With this manuscript theft comes new characters, some ultimately good and others bad. As you might guess, Alex’s powers don’t stay gone forever but come back gradually and without explanation. … So, if you enjoy an action packed, danger filled story with a smooth plot and a great paranormal component then I suggest that you give this new release a try….”

Dark Diva Reviews – 4.5/5
– “….As a fan of Ms. Scott, I eagerly await anything that she writes as I know that I will not be dissatisfied. Book of Secrets is a different style of writing as compared to her other popular series, but none the less, just as well written. At times I found my heart beating wildly as we were led on a racing adventure and then smiling pages later. Mystery and suspense meld with ancient history and mythology, a combination that would intrigue any reader; especially this reviewer. I can only hope that Alex and Luke will speak through Ms. Scott in the near future as a book three is definitely in order. If you are a fan of Ms. Scott and have yet to read this series, do not let it pass you by. You will not be disappointed….”