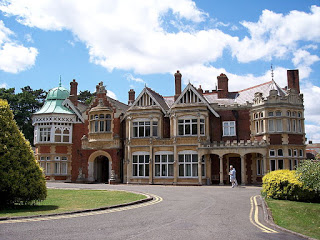 Long before England existed, this area was at the bottom of a primeval sea.

Watling Street – major roman road – Watling Street is the name given to an ancient trackway in England and Wales that was first used by the Britons mainly between the modern cities of Canterbury and St Albans. The Romans later paved the route, part of which is identified on the Antonine Itinerary as Iter III: “Item a Londinio ad portum Dubris” – from London to the port of Dover. Its route is now covered by the A2 road from Dover to London, and the A5 road from London to Wroxeter.The name derives from the Old English Wæcelinga Stræt. Originally the word “street” simply meant a paved road (Latin: “via strata”), and did not have the modern association with populated areas.

During the Second World War, Bletchley Park was the site of the United Kingdom's main decryption establishment, the Government Code and Cypher School (GC&CS), where ciphers and codes of several Axis countries were decrypted, most importantly the ciphers generated by the German Enigma and Lorenz machines. It also housed Station X, a secret radio intercept station. Although interception was soon moved to a location with better reception, the name persisted for the Bletchley Park wartime activities.

During World War II, Alan Turing worked for the Government Code and Cypher School (GCCS) at Bletchley Park, Britain's codebreaking centre. For a time he was head of Hut 8, the section responsible for German naval cryptanalysis. He devised a number of techniques for breaking German ciphers, including the method of the bombe, an electromechanical machine that could find settings for the Enigma machine.

Turing's homosexuality resulted in a criminal prosecution in 1952, when homosexual acts were still illegal in the United Kingdom. He accepted treatment with female hormones (chemical castration) as an alternative to prison. Turing died in 1954, just over two weeks before his 42nd birthday, from cyanide poisoning. An inquest determined that his death was suicide; his mother and some others believed his death was accidental. On 10 September 2009, following an Internet campaign, British Prime Minister Gordon Brown made an official public apology on behalf of the British government for “the appalling way he was treated”.

Buckingham is the first settlement referred to in the Buckinghamshire section of the Domesday Book of 1086. Close by is Stowe School, a private school – the ground of which are used in a lot of films. Close to Buckingham is Claydon House. Claydon House has been in the Verney family since the late 15th century.

During the Civil War the family had divided loyalties, with sons on opposing sides, although Sir Edmund served as Standard Bearer to King Charles I and lost his life at the Battle of Edgehill.

In the 19th century Sir Harry Verney married Frances Parthenope Nightingale, sister of Florence. Sir Harry was devoted to Florence, and she enjoyed spending her summers here. Her bedroom, many of her letters, and other mementoes can be seen today.

Bolbec castle was burned down by parliamentary forces during the English Civil War, the mound still remains as does the spring, called Fair Alice, which was the fresh water supply for the castle.

Aylesbury is the county town of Buckinghamshire in South East England.

In 1450 a religious institution called the Guild of St Mary was founded in Aylesbury by John Kemp, Archbishop of York. Known popularly as the Guild of Our Lady it became a meeting place for local dignitaries and a hotbed of political intrigue. The Guild was influential in the final outcome of the Wars of the Roses. Its premises at the Chantry in Church Street, Aylesbury, are still there, though today the site is occupied mainly by almshouses.

The town played a large part in the English Civil War when it became a stronghold for the Parliamentarian forces, like many market towns a nursing-ground of Puritan sentiment and in 1642 the Battle of Aylesbury was fought and won by the Parliamentarians.

The Jacobean mansion of Hartwell nearby was the residence of Louis XVIII during his exile (1810–1814). Bourbon Street in Aylesbury is named after the king. Louis's wife, Marie Josephine of Savoy died at Hartwell in 1810 and is buried in the churchyard there. She is the only French Queen to be buried on English soil.

The town also received international publicity in the 1960s when the culprits responsible for the Great Train Robbery were tried at Aylesbury Crown Court. The robbery took place at Bridego Bridge, a railway bridge at Ledburn, about six miles (10 km) from the town. The 7 July 2005 Piccadilly Line bomber Germaine Lindsay's home was in Aylesbury at the time of the bombings, though he was originally from Jamaica.

The Games were originally held in 1948 by neurologist Sir Ludwig Guttmann, who organized a sporting competition involving World War II veterans with spinal cord injuries at the Stoke Mandeville Hospital rehabilitation facility in Stoke Mandeville, England, taking place concurrently with the first post-war Summer Olympics in London. In 1952, the Netherlands joined in the event, creating the first international sports competition for the disabled. In 1960, the Ninth Stoke Mandeville Games were held in Rome, Italy, following that year's Olympic Games. These are considered to be the first Paralympic Games.

In 1874, Baron Ferdinand de Rothschild bought a large estate in the area and built the mansion of Waddesdon Manor on a hill-top above the village. He transformed Waddesdon into an estate village, with new houses for employees and tenants, a school, a public house, cricket pavilion and village hall.

Waddesdon was often referred to as Black Waddesdon and was notorious for being one of the most dangerous stops on what is now the A41. Highwaymen were rife and the chances of being held up at gun point were significant.

Ask RJ: Where should a reader start

How To Howl At The Moon – Eli Easton