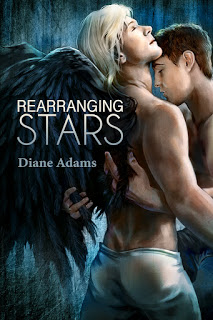 REARRANGING STARS released today by Dreamspinner
BLURB: The freedom to love comes with a
cost.
As a guardian angel, Drake’s
destiny is written in the stars. Choice is not part of an angel’s life. Drake
never thought twice about it until he’s unexpectedly thrust into watching over
Grey, who inspires passion in Drake but endangers his very identity as a
guardian angel. Grey is more than just another human—he can see angels. When he
discovers that unlike his previous angel Drake will talk to him, Grey becomes
determined to pull Drake off the sidelines and into life. Attraction flares
between them from the beginning and causes Drake to question his purpose for
the first time. His distraction results in a decision that changes
everything—and not just for him and Grey.