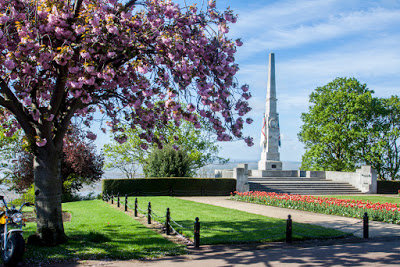 I never knew my grandad. Or rather I did know my Grandad – let me explain.

I knew the man that my Gran married after WW2 and I called him Grandad and he was awesome. He was exactly what Grandad's should be like, spoiling me and my sister, teaching us cards, and doing all kinds of awesome Grandad type stuff. We lost him some time ago to cancer, my Gran a few years later well into her late 80s.

But my Gran was married before. To a man called George, who is the actual biological father of my mum. He was sent to war at a very young age, ending up in Singapore. Unfortunately he was one of those who never made it back, dying of malnutrition and mistreatment working on the Burma Railway. He never saw his daughter, and my Gran, like so many of her generation, was widowed at a very young age. In the war memorial in Priory Park, is a list of 1,352 names for World War 1 and 754 for World War 2. He is actually buried overseas where he fell.

Luckily my Gran fell in love again, years later. She met John who had been in the Navy and survived the war, who she married, and who became a dad to my mum and mine and my sister's defacto Grandad.

Long story short, there will be a road in Southend named after my Grandad George, the man who died, and it will be on a new estate being built on the site of the factory where George and my Gran first met as very young teenagers.

The romance has kind of gone full circle.

This makes me smile.