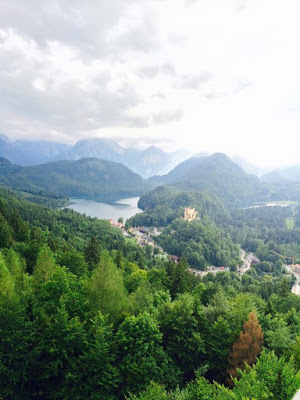 I'm not sure where to start with this one. Our trip to Munich was split into two parts. The first was a three-day mini break with Amber Kell and hubby, the second part was the con…

First off, the best thing to do in Munich is hire a car, hit a main road, and turn off when you see a brown tourist sign. In the UK this means you will be one of *lots*, in Germany this move took us to two charming villages, some fantastic local food, and lots of pictures of gorgeous houses and churches.

We also visited Neuschwanstein Castle (a nineteenth-century Romanesque Revival palace, above the village of Hohenschwangau near Füssen in southwest Bavaria, Germany). The picture is the view of the Alps from the castle, across to another castle! I could have stayed here all day just staring.

We visited the Munich museum and got quite involved in pressing buttons and doing experiments. I made electricity at least three times by pressing and pulling stuff… (technical analysis), which was amusing.

On Friday, hubbies birthday, we went off out in the car again and discovered a lake, which we drove around, slowly, on small narrow roads.

Ice cream, coffees, apple strudel. Yep, more gorgeous food, and I caught the sun on my back. This I only realized when I climbed in the shower the next morning, turned on the water, and AGGGHHHHH … sighs…

And then Friday evening…

… we went out with about 30 others to a restaurant, a cake for hubby, and gorgeous food. Met a lot of familiar faces, and some new ones. A fantastic way to start the weekend!

Saturday, the panels were excellent, and Andrew Grey’s speech about *his* Pride, was awesome (way to have me fearing how I was going to follow it the next day! ROFL). I sat on the Social Media panel, but things went a bit odd after some miscommunication and we somehow got to talking about book pricing. *frowny face*. So I argued, and us English aren't so hot with confrontation generally. ROFL. Still, all in all, it ended ok and Lynn Crane and I did our best to get our message across. 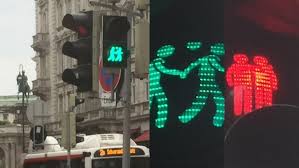 Pride was in the middle of the day, and we watched from the sidelines (it was so HOT, I would have DIED in the parade itself…!). We found a shady spot and I took some video. Lots of hot guys and girls, and loud music which you could feel in your bones… awesome… Sausages for lunch (loads more food!)… Walking around Munich we saw a load of couples, all holding hands, and it was really lovely to see.

They also changed the lights on the crossings, which was so cool 🙂

Saturday evening was dinner and *yum*, and then, somehow I was volunteered by Amber to pack goodie bags… *second frowny face*… although the wine helped… ROFL.

Sunday I woke up nervous. I ate breakfast, nervous. I listened to panels (including one on world building from Amber, during which, I didn't heckle once).

After another round of food it was my turn to talk, and I was lucky that my *RJ Scott* persona took over and I could stand in front of all the attendees and talk. Hubby videoed the whole thing and I’ll be putting a link to it on YouTube as soon as it’s all uploaded. It seemed to go well, and so after that I managed to relax!

Signing was cool, I made new friends, gave out (and received) loads of hugs, handed out free books, and generally chatted and laughed until my throat started to feel sore!

All in all, despite the organisational teething problems of a new con, this was an awesome start to what I hope will become an established GLBTQ convention. And next year is in Berlin; a stunning city by all accounts.

A big thank you to Dani, Marc, Anna, and all those behind the scenes.

It was a blast, and I will remember my visit to Germany as having good memories that I will think about often.