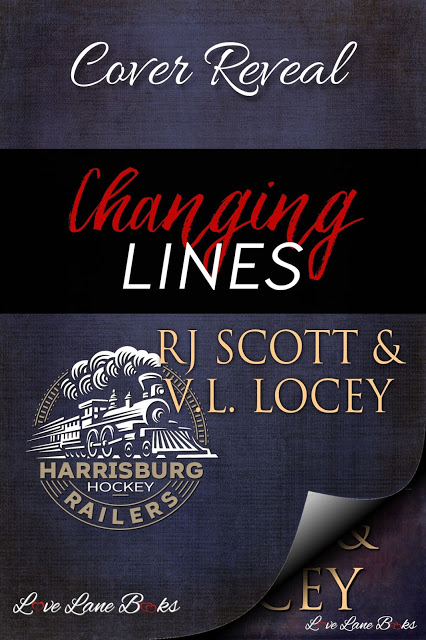 by RJ Scott
307 views
No Comments
0
ADD TO GOODREADS

Some of you may realize I like hockey (LOL).

I've already begun a series of MF ice hockey books (The Burlington Ice Dragons), but have really wanted to fit in a series of MM stories as well.

And then I got talking to VL Locey. Now, she's a big fan of a rival team (the New York Rangers), but I got over that after a few days – ROFL. We clicked when we were chatting on line, we even respect each other's teams, and that has to be good! We've hatched a few plans to get rid of any teams that are higher than us in the rankings. Mostly we laugh, and I absolutely LOVE her MM hockey books featuring Dan and Vic (more here), seriously a must read for anyone that likes a gritty story with a very sexy slant. Oh and hockey, and fighting, and *sighs*, one of the best *Bastard-of-a-hero* characters I have read.

So… you can guess where this is going…

Changing Lines, book 1 in our Harrisburg Railers series will be out 12 July, and we have a cover reveal booked for early June. I can't wait to show you the cover because it's bloody awesome and sexy and GAH. Meredith Russell has outdone herself… again…

Meanwhile VL and I are plotting and creating characters, and getting very excited.

We've created a whole new team (a bit like I did with the Dragons) and I can actually share the logo today on the beautiful cover release graphic Meredith created.

The Harrisburg Railers – What's in a name?

Wiki… “During part of the 19th century, the building of the Pennsylvania Canal and later the Pennsylvania Railroad allowed Harrisburg to become one of the most industrialized cities in the Northeastern United States.  …  With Harrisburg poised for growth in steel production, the Borough of Steelton became the ideal location for this type of industry. Steelton was a company town, opened in 1866 by the Pennsylvania Steel Company. Highly innovative in its steel making process, it became the first mill in the United States to make steel railroad rails by contract. …”

Add the book to Goodreads