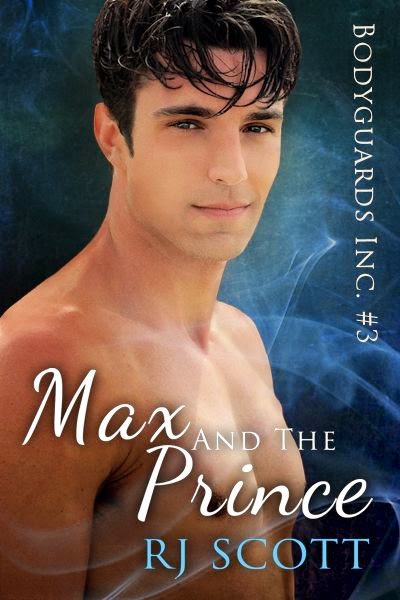 Book 3 in the Bodyguards Inc series

Book 1 – Bodyguard to a Sex God

Book 2 – The Ex Factor
Bodyguard Max Connery is used to being mistaken for being younger than he is.

When a threat is made on the life of a prince attending University in the UK, Max is the perfect choice to blend in with students and to keep Prince Lucien safe. Even if it means joining the swim team to be by his side.

But, when death visits the University, abruptly this job is a long way past keeping the prince happy and safe. Instead Max has to keep Lucien alive.

Drawing back his shoulders Max knocked on the door and waited for the enter before going in. There was no shouting now, just a horrible cold silence. Max quickly assessed the situation in the office. He categorized Teddy the giant, six eight at least, broad, short to the scalp hair, a scar on his forehead, black suit stretched over his muscled frame, ear piece dangling on his neck, and a scowl carved into his expression.

Which left the other one the Prince. Right? Didn’t look much like a prince though. The man was slouched in the chair with familiar white leads from ear buds plugged into an iPhone. Max couldn’t see the Prince’s face, hidden as it was by the fall of the hood on a bright sapphire Cardiff University sweatshirt. Baggy jeans and scuffed converse finished the look of couldn’t-care-less rebel. Max could hear the music the Prince was playing from here. Not the bones of it to recognise an artist, but the high tinny beat of the music that flowed in time with the tap of the guys left foot.

“Maxwell Connery, Theodore Estevan.” Kyle indicated the Giant and Max held out his hand to shake and was treated to a quick once up once down from Teddy, or Theodore as he was being introduced. “And this is Prince—“

“This is your man?” Teddy interupted with something akin to horror in his voice and stood up so violently that he caused the chair he had been on to skitter back and hit the wall. “This child.” Teddy’s voice held an inflection, something Mediterranean maybe? Although it was lost in the sheer dismay in the tone.

Max didn’t drop his hand, and whether Teddy couldn’t think of another reason not to shake it, or whether he was just being polite, Teddy grasped him hard and there was a quick squeeze that was probably supposed to underline Teddy’s intimidating size and strength. Theodore was strong, that was undeniable, but Max didn’t flinch.

Max waited for the introduction to the elusive guy under the hood. Instead Teddy grabbed his chair and sat back down. There was evidently no rush to include the Prince in any of this, not that the Prince seemed at all bothered. Apart from the tapping of his foot and the rhythmic rise and fall of his chest he didn’t move an inch.

“Max is one of my best operatives,” Kyle said. His tone was that one he used when he was calming Ross down after a missing stapler incident, all calm and encouraging. Like if he said something in just the right way then the situation would be diffused.

Teddy sneered at Max. “You told me this Max was a pilot, ex Air Force. I don’t see that in this kid.”

“I am former RAF,” Max said. “Ten years, including two tours of Afghanistan.” Max refused to be insulted by the open contempt and disbelief on Teddy’s face. If it wasn’t for one crashed plane and a faulty ejection seat he’d still be flying, and he was proud of what he’s achieved in his time in the service. People could judge him on his age but not when it came to his accomplishments in his career.

Teddy huffed dramatically, and added an angry shake of his head.

“If you think I am handing Prince Lucien over to the care of someone as… little… as this man. What happens when someone comes up to attack? Is he going to blow them over with a kiss?”

Max didn’t retort. He wanted to, but that wouldn’t be professional. No, he had to let Kyle lead this. But hell if he would forget that kiss comment. He’d find Teddy and knock all six eight of him on the floor then stand and laugh. There was no adage more appropriate than the bigger they are the harder they fall. Max might only be five nine but he knew all the moves to bring tree-size men to their knees.

“I’d suggest you show my operative respect,” Kyle began. Max cast his boss a quick glance. That kind of language didn’t get sales, Kyle’s words could provoke, and provoke they did.

Teddy stood up again and Max winced as the chair smacked the wall hard enough to leave scuff marks.

“Prince Lucien will not be spoken to like that. We’re leaving,” he announced theatrically, with a wave of his hand, and the gentle press of fingers to hood-guy’s shoulder.

At the touch the hidden man moved away from the hand and with an exaggerated sigh he pushed back his hood and pulled out his earbuds. Then he stood up but Max couldn’t get a good look at him because Teddy was in the way.

“You need to go outside, Teddy.” The guy’s voice was slightly accented but English enough so that it was difficult to ascertain the country of origin, similar to Teddy’s. Prince Lucien sounded tired.

“I know you’re only thinking of me, but please Teddy, give me five.”

Teddy didn’t respond but there was a visible tightening of his shoulders and he spun, deceptively graceful for such a big guy, to face Max. There was one final stern glare that dripped with so much warning Max nearly took a step back, then Teddy moved away and left the room.

For the first time Max got a good look at the man who had been hidden under the hood. Dark hair, tousled and messy from the hood, still managed to sit in that just out of bed look with bangs that dropped to his eyebrows. With the hair was the darkest of eyes, a rich chocolate brown, and hell, the kid had cheekbones to die for, and a wry smile on his face. He didn’t look like any kind of Prince that Max had seen before, certainly not all spit polished and serious like he’d expected him to be.

Max couldn’t help himself, he smiled back and extended his hand. “Max Connery,” he offered.

“And I’m Lucien Manganello. Could I possibly have the room for a few minutes?” He was talking to Kyle who looked at both him and Max with concern on his face.

Kyle scooted up from his chair and left the room his hand briefly squeezing Max’s shoulder as he went past.

“Call me Lucien. Please.” He didn’t make a move to sit himself, instead he tilted his head. “Do you swim?”

Max blinked at the question. Swim? Was this a way to start a conversation? “I swim,” he said. He tried not to let the uncertainty in his head filter into his voice. He’d been on four separate jobs with BI and he’d never been asked whether he could swim before.

“How well?” Lucien tilted his head as he spoke his dark eyes narrowing as he assessed Max. “I mean you’re not tall, so your length would be less than…” he trailed away and stopped talking, a sudden flush of colour on his cheeks.

“Well enough to be on a swim team?” Lucien sounded so earnest and so young. He was twenty-five but at this moment he sounded so eager and excited that Max felt terribly old. A swim team? That would involve swimming fast and yes, he could swim, but he wasn’t the fastest or the best swimmer out there.

Lucien huffed a laugh. “Actually, you don’t have to answer that, I mean, it’s the perfect way to keep close to me, if you practice with the swim team I mean. Or maybe you pretend to be my boyfriend or something otherwise so you can come watch me practice. Because, I won't give up my swimming okay, whatever you say, however many times you lock me in a room, I will always find a way to get out and swim.”