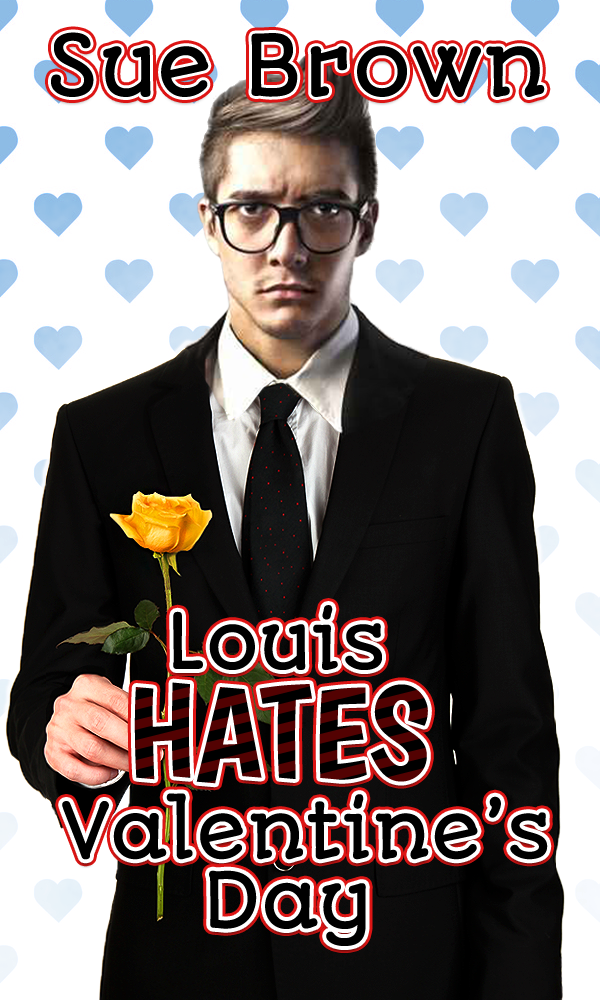 Comment on this post for a chance to win a copy of Louis Hates Valentine's Day. If you are a UK winner you can win a selection of chocolates made by my daughter's chocolate company using Fairtrade chocolate.

“I hate Valentine’s Day.” That was an understatement. Louis couldn’t explain the anger and resentment he felt to everyone who openly celebrated their love on that one day in the year.

“I can understand that.”

Louis was pretty sure Arnie didn’t but he wasn’t going to argue. “And I haven’t been out with anyone in three years. I go to clubs to hook up, but I’ve never found anyone I wanted to share my life with.”

“Because I realized I really like you, and the thought of not seeing you every week makes me hurt for some reason.”

Arnie pursed his lips. “You mean you’ll miss my money.”

Arnie put his coffee on the table before he accepted the rose. “It’s beautiful,” he said as he sniffed at the rose. “Yellow roses mean friendship, don’t they?”

“Sometimes. They also mean love.” As Arnie looked up, surprise and hope in his eyes, Louis said hastily, “I’m not saying I love you yet, but I really like you and I think I could grow to love you.”

“I thought I’d never see you again. I wasn’t going to come back to the shop.”

“I know. I was so bloody blind. Will you forgive me for being an idiot?”

“I should have been brave and told you the flowers were for you, I just thought you’d guess. But as the weeks went past and you didn’t, I had no idea what to say or do.”

Louis stepped closer until one more step would have brought him flush up against Arnie. He could see the nervousness in Arnie’s eyes, the way he blinked rapidly and clenched his fists.

“Have you been in a relationship recently?”

Arnie shook his head. “No. Not ever really. I’m not the sort of guy men go for. I’m a bit shy really.”

“Not one boyfriend?” Louis blinked. “But you’re gorgeous.” Had Arnie looked at himself in the mirror recently?

Arnie flushed bright red to the tips of his ears. “No, I’m not. Guys think I’m going to be exciting because I work in advertising, and then they meet me and find out I’m really boring.”

God. The man that had spent an entire year listening to Louis drone on about flowers and he thought he was boring?

“Have you…?” Louis squirmed as he tried to ask a very personal question.

“Thank God for that.” Louis had long gone past the stage when he wanted to pop a guy’s cherry.

Arnie’s lips were soft and slack beneath his, and Louis panicked that he done the wrong thing, gone too fast, but then the man seem to shudder against him, and his mouth opened up under Louis’, his tongue gently licking Louis’ lips. They kissed for what seemed an eternity, Louis gently coaxing responses from Arnie that he was sure the man hadn’t felt before. Louis was a great kisser and Arnie, a willing pupil in his arms.

When they finally parted, Arnie stared at him, his eyes glazed and his lips red and swollen. “God. You’re just… you’re…,” he managed. Louis waited to hear what he was. “You… all these months I’ve been dreaming of this, and I never imagined….”

Louis swept the pad of his thumb over Arnie’s puffy lips. “I wish I hadn’t been so damn blind for so long.” He ran his fingers through Arnie’s hair and pulled him close, deliberately pressing his arousal into Arnie’s thigh, hearing the gasp that Arnie couldn’t suppress.

He leaned up to kiss Arnie again, only to hear, “Oh bugger!” Well, yes, but they hadn’t got to that yet.

He looked down at Arnie, who was frowning. “Huh? What’s wrong?”

“The rose. We squashed it between us and now it’s ruined.” Arnie held up the tattered remains of what had once been a beautiful yellow rose, just coming out of bud.

Louis bit his lip. “Sorry,” he offered in the face of Arnie’s distress. He stroked Arnie’s cheek. “I’ll get you another one.” Arnie nodded. Louis bent down to kiss him again and chase the anguish away from his face. “I will give you a rose every day for the rest of your life.”