I love it when I find a new author and in particular one that I can recommend to my readers. With the proviso that I went into the book not knowing it was three separate stories (and so got a little confused, more below), I can highly recommend this book to everyone.

What I love about JR's writing is that it just pulled me right into the story, and I couldn't put the book down. She has a way with words that meant I could just lose myself in the story itself, and I can't wait to read more from JR.

I was given an ARC, but as you know, I don't automatically review the ARCs I have been sent unless they are a five *, so you can guess I loved it! LOL.

(As an aside – The three separate stories are couple 1, couple 2, then back to couple 1. I genuinely think this should be two separate novels – one with JUST couple 1, and then another with JUST couple 2. So if I was you, I would read both parts of couple 1 and THEN go read the couple 2 part.)

Dr. David Christmas has heard every joke in the book when it comes to his name. Weary of the festive season and from his long shifts in the emergency room, David is also tired of his lonely single life. His only hope for Christmas is a glimpse of the shy but gorgeous neighbour who lives above him.

Christmas-loving Julian has nurtured a crush on the grumpy man downstairs for years now. Still hurting from his ex-boyfriend's cruelty, he hasn't yet dared to say hello. When an injury on Christmas Eve puts Julian directly into David's careful hands, a little healing might be on the way.

KIND OF A BIG DEAL
and
THE FARRINGDON CLUB

Up-and-coming comedian Zack Wynn splits his time between the stage and the London pizza restaurant where he works, until life hands him one hell of a Christmas present. Richard Garston is the handsome and clever older man of Zack's dreams, but what exactly is it that Richard does?

Soon, Zack learns the truth: Richard's classified role in the British government makes him a much bigger deal than he claimed. 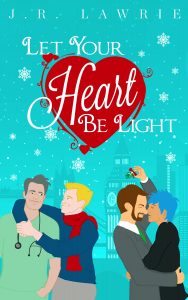