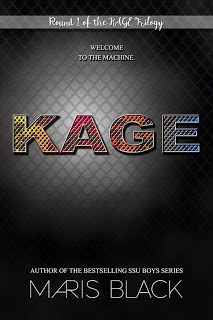 ROUND 1 of the KAGE Trilogy
My name is Jamie Atwood, and I’m an addict. I never thought I’d say such a thing. Never had a problem being overly-attached to anything in my life. I came from a perfectly middle-class family, made good grades, and had a hot cheerleader girlfriend. But the truth is, nothing ever really moved me. So how did a guy like me become an addict?
I met Michael Kage.
Kage is an MMA fighter. A famous one. I like to think I helped him get that way.
He’s charming as hell, with looks to rival any movie star and talent to back it up. So why did he need to hire me as an intern Publicist? Simple. He has a darkness in him– like a black hole so deep it could swallow him, and me, and everyone we know– and that’s not good for business.
The first time I met him, I felt the pull. I think the addiction began at that very moment. And even if I’d known then what I know now, I would have fallen for him. How could I not?
For me, Kage is everything.

Buy Links: Amazon US  Amazon UK
Amazon
CA Amazon AU
Amazon
DE    Amazon
FR AllRomance Maris Black Books on Barnes & Noble Maris Black Books
EXCERPT
“What is it that you don’t want me to see?”
“I guess I just don’t want you to see me
differently.” He didn’t look me in the eye as he spoke, just kept watching his
finger tracing that figure eight, which seemed to have literally become an
infinity sign. “You don’t know how brutal it can get in there, Jamie. How
brutal I can get. I kinda like the way you look at me now.”
“Like I want to eat you alive? You like how
I’ve got the cannibal thing going on, huh?”
He laughed quietly. “Yeah, I like that.”
“So what makes you think that will change?”
“Fighting is different when it’s someone you
know.” He finally met my eyes, and there was a haunted look in his. “You want
to see me get punched in the face so hard my knees buckle? Or kicked in the
kidney so hard I can’t stand up straight?”
I stared at him, my eyes wide, imagining the
things he was describing. He was right. I wasn’t sure if I could sit on the
other side of a chain link fence and watch Kage get hurt.
“What, no comment?” he asked.
There was a change in his voice, and in his
demeanor. That little light his eyes had when he looked at me— the one that
made me believe he might see something special— was gone. Snuffed out and
replaced by a cold darkness. Then the barest hint of a sneer tipped one corner
of his lips, and I pulled away.
“Think you can handle watching me bend a gown
man’s arm backward, hearing the bone snap before he has a chance to tap out?
How about punching a man in the face until there’s blood spewing everywhere and
he’s lying there limp like a rag doll, head flopping as I bash his fucking head
into the mat? Have you ever seen a guy kicked in the face so hard you think his
neck snapped? How about seeing me choke a man unconscious and wondering for the
next sixty seconds if he’s ever going to wake up again?”
“Kage—”
“That’s what I do, Jamie. I hurt people. Do
you know what they call me in there?” He gave me a smile that was one part
sarcastic, two parts cruel. “They call me the Machine. Do you think you can
have feelings for a machine?”
Feelings? Did he
want me to have feelings for him? Because I was pretty sure I already did.
AUTHOR BIO
My name is Maris Black (sort of), and I'm a Southern Girl
through and through.
In college, I majored in English and discovered the joys of
creative writing and literary interpretation. After honing my skills
discovering hidden meanings authors probably never intended, I collected
my near-worthless English degree and got a job at a newspaper making
minimum wage. But I soon had to admit that small town reporting
was not going to pay the bills, so I went back to school and
joined the medical field. Logical progression, right? But no matter what
I did, my school notebooks and journals would not stop filling up with
fiction. I was constantly plotting, constantly jotting prose, constantly
casting the people I met as characters in the secret novels in my
head.
Yep. I can blame my creative mother for that one!
When I finally started writing fiction for a living, I surprised
myself with my choice of genre. I'd always known I wanted to write romance, but
the first story that popped out was about a couple of guys finding love during
a threesome with a woman. Then I wrote about more guys, and more guys, and more
guys. I was never a reader of gay fiction, and I'd never planned to write it.
The only excuse I have for myself is: Hey, it's just what comes out!