Hi, everyone! I want to thank RJ for inviting me to the blog. Curiosity Killed Shaney is my first published novel and I am thrilled to share this story with all of you.

This blog tour got huge fast! There are awesome prizes to that will be given away at the end of the tour. At the end of this post, you will find a link to enter! Check in at www.jcwallacebooks.com for links to all of the blogs in the tour and you can enter as much as you like!


Shaney and Hudson are the MCs of Curiosity Killed Shaney. I previously attempted to interview each of these guys separately (click here for the past Shaney interview, past Hudson interview) and those didn’t go so well. Hopefully, having them here together, the process will go better.

Shaney: Thanks for having us here again today, JC. Sorry about the last two times.

Hudson: Yeah, thanks for your patience with us (gives Shaney a sideways glance).

JC: So I’m going to ask you each the same questions however, there’s a catch. You must answer the questions for each other. (That raised some eyebrows). First question, how old are you, where do you live and what do you currently do?


Shaney: Hudson is twenty-six. He lives in Tupper Lake, NY on Gull Pond and he’s the best carpenter, ever! But he’s shy so he would only tell you he’s an okay carpenter but really he’s awesome. Also, he does work for people who can’t pay so he’s a generous carpenter as well.

Hudson: (smiles at Shaney) Shaney just turned twenty. He also lives in Tupper Lake. He’s currently finishing up his community service hours, which is going surprisingly better than in the past. I’m hoping he’ll start some college classes soon after we clear up some lingering “issues.” (Shaney smirks)

JC: Here’s an easy one. Boxers, briefs, or commando?

Shaney: Hudson is a briefs man. And boy, do they make his package hu—

Hudson: Shaney! (shakes his head) Let’s keep my size of my package between us, okay? (Shaney nods reluctantly) Shaney is all about the boxers and the wackier the better. I think my favorite pair is the one with the elephant on the front and the trunk where you put your…um…

JC: (now I’m shaking my head) Tell me about your personalities. Are you the life of the party or more of a wallflower?

Shaney: Hudson is a total wallflower, but I’m slowly hammering that out of him. He tends to be shy and reserved and totally stoic at times, but I’ve seen behind all of that. When he laughs, his eyes lights up, and his smile gets big and he just doesn’t know how gorgeous he is. (Yup, Hudson’s blushing). He is kind and generous and honest and hardworking. One of the best people I’ve ever met.

Hudson: Shaney is not just the life of the party, he is the party. At times that can be overwhelming, but he’s shown me how to have more fun. He has a spark that’s always lit, and he wants to know what’s happening and why it’s happening. That tends to get him into some trouble at times and scares years off of my life, but I wouldn’t change him for the world. He’s got a heart the size of a mountain and he cares about people. And he’s brave. Braver than anyone I know. (Hudson turns a soft gaze on Shaney who smiles back warmly)

JC: Wow, so that leads me to my next question. Did you each of you expect to fall in love with some like the other?

Shaney: Hudson so didn’t expect to fall with someone like me, I think. I mean he’s big and burly and I’m short and scrawny. Plus, I can be more trouble than I’m worth, and I sometimes wonder if he would be happier with someone more mature.

Hudson: (shakes his head vehemently) Stop, baby. You’re perfect just the way you are. We fit. Did Shaney think he would fall in love with someone like me? He’s so open and out there in the world. He doesn’t hide who he is or how he acts. Like he said, I’m closed off, tend to be a loner. He needs someone who’s alive and will live life with him. I’m not too sure I can be that person for him.

Shaney: (jumps up, stands before Hudson and cups his cheeks) You’re my everything and exactly what I need. Don’t ever doubt that. (Hudson smirks, nods and then they’re kissing…and kissing…and groping and…) 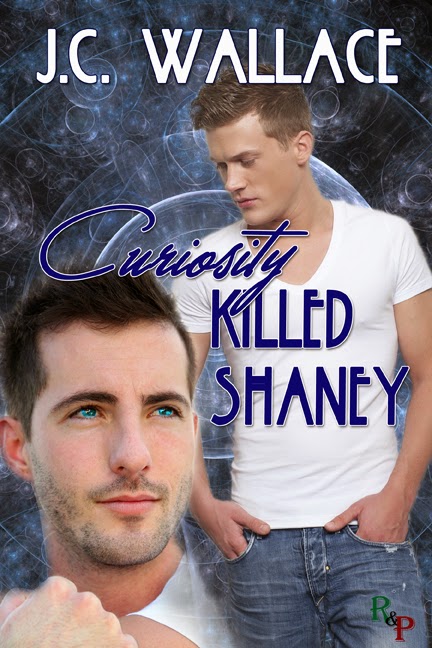 JC: Um…guys?….Shoot, I’m never going to get them through an entire interview. See ya later and get a room!

Thanks for stopping by! Tomorrow, the blog tour will visit the blog of Elyzabeth M. VaLey. Hope to see you there!

Blurb: Shaney's curiosity is always getting him into trouble, including stumbling into a ritualistic circle and being imbued with an energy that will eventually tear him apart. He soon finds out that Hudson, a man he cares for deeply, might be responsible for his misfortune. Add in the betrayal by his best friend Todd and the desire of a demented occultist named Silas to control the energy inside of him and there seems to be no way out. Can Shaney find a way to rid his body of the nefarious energy before he dies a horrible death?

The cabin was dark. Still, the uneasiness plaguing Shaney’s gut crept through his veins. Todd shifted restlessly beside him.

“Any chanting or pressure to run away?” Todd asked in a hushed voice.

Shaney peered out into the unnerving darkness. “No chanting. Running has crossed my mind, but that chicken shit is all on me.”

“Since when does anything remotely interesting scare you off?” Todd asked.

“Since yesterday,” Shaney replied and waved Todd to follow him to the stairs leading to the front door.

The dried, crusty remnants of mud crunched beneath Shaney’s sneakers as he crept up the stairs. Shaney froze on the last step. Shit. The front door was ajar again. Hudson must have locked it when they’d been there earlier, right? Why would he have left it open? Shaney’s apprehension kicked into a heart-pounding panic, but they’d come this far, they couldn’t run now. Using the end of his flashlight, Shaney warily pushed the door open. He scanned the interior and his eyes widened as he stepped in cautiously.

“What the fuck?” he managed to get out.

Pushing in behind him, Todd let out a loud gasp, and then took a step back. “No.”

What little furniture there had been was piled into the corners. Complex symbols and shapes drawn in black covered the walls and the ceiling. Rendered on the old wood floor were more symbols and shapes in what looked like white chalk.

“I’ve seen these before,” Todd whispered, gesturing to the cryptic graffiti covering every surface.

“And?” Shaney asked, waiting for the punch line.

Shaney continued to run the beam of the flashlight over the symbols, which looked like a cross between something occult, Egyptian, and tenth grade geometry class. The symbols ranged from small, about a foot wide, to massive, like the one on the floor that spanned at least eight feet. Taken as a whole, each symbol was a dizzying array of angles and intersecting lines. But looking closely, Shaney could discern repeating patterns such as triangles, squares, and circles. Other odd shapes and numbers rounded out the symbols. It was as if he’d jumped straight into an episode of Supernatural. Maybe last year’s attempted exorcism of Shaney’s alleged demon hadn’t been so far-fetched.

“How fucking long would it take draw something like this?” The angles were too precise, the lines too straight. Someone had taken painstaking care in executing these images.

“So not the part to be focusing on,” Todd said dryly.

“So what’s all of this for? Some kind of magic spell? Some occult shit? Exorcism? Voodoo?” Shaney was trying for sarcasm, but with the hair standing up on his neck and tremors rippling his skin, he couldn’t pull it off. He stared at the massive circular symbol that consumed the floor and swore the lines were vibrating. He opened and closed his eyes to try and stop the visual disturbance.

“Yes and no to all of the above,” Todd stated matter-of-factly while pulling out his phone.

“Taking pictures.” The blinding white flash lit the room as Todd methodically documented the symbols without moving closer into the room.

“Change places with me,” Todd said, scooting past Shaney to capture the symbols on the wall behind him. “Whatever you do don’t step on any symbols,” Todd said just as Shaney was about to lay his shoe on one.

Shaney twisted mid-step to avoid the small S-shaped symbol beneath his foot, but his center of balance shifted when he knocked his shoulder against the open door. The momentum slammed the door shut and Shaney stumbled back into the room. Flailing his arms, he managed to remain upright.

Todd turned to Shaney. His face paled in the illumination from their flashlights. His eyes widened in what Shaney could only describe as unadulterated horror.

Shaney chuckled nervously. “Umm, Todd, I stepped on a symbol,” Shaney said, standing almost dead center of the largest one on the floor. No answer. When Shaney tried to move, his lower body wouldn’t respond. Oh, shit. “Todd, I stepped on a fucking symbol and I can’t move!” Panic flooded his system with adrenaline as he repeatedly tried unsuccessfully to move. That seemed to snap Todd out of his trance.

Todd glanced around the room, and Shaney hoped he was looking for a solution to his dilemma. Todd’s eyes stopped on the closed door. A partial symbol covering the door lined up with a symbol that was its mirror image on the wall adjacent to it. Closing the door had made the two halves a whole.

“Damn it!” Todd sprinted to the door, leaping over symbols on the floor. He grabbed the handle and yanked hard on the door, but it didn’t budge.

A low vibration beneath Shaney’s feet pulled his attention away from Todd’s struggle. He frowned. The vibrations reminded him of an approaching train on the railroad tracks—and his foot was caught in the proverbial rails.

“Todd?” Shaney swallowed hard as the vibrating intensified and filled his legs.

Todd stilled his attempts to open the door and turned back to Shaney.

“Todd, something’s happening. Get me off of here!” Shaney pleaded as all of the hairs on his body stood on end. A shot of tingling energy pulsed up through the soles of his cross trainers, and flashed through his entire body.

Shaney is so excited about his story being told that he is giving away some great prizes!

P.S. He’s really excited to give them away!

You can enter daily along the blog tour, as often as you like!

I have been writing all of my life, however it was just this year that I ventured out to be published. In my day job, I am a behavior analyst. At night and on the weekends, I write about all things men. I believe there is nothing hotter than two men finding and loving one another, whether for a night or forever. An avid reader of M/M romance, I love a good twist of a plot, HEA, HFN, or tragic ending.

I am owned by three kids, one grandchild and one on the way, two dogs and one cat. I live in the beautiful Adirondack Mountains in Northern NY