More Texas this week, only a couple of days until the release of Texas Gift (Texas #8) and we're featuring Texas Winter today, where we get to meet Hayley for the first time. 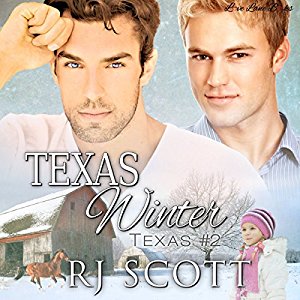 Sean Crisden is a multitalented actor and an AudioFileEarphones Award–winning narrator who has recorded audiobooks in almost every genre, from science fiction to romance. He has also voiced characters in numerous video games, such as the award-winning ShadowGun, and appeared in many commercials and films, including The Last Airbender. A native of Philadelphia, Pennsylvania, Sean now resides in Phoenix, Arizona.

And the drama continues!! Jack and Riley are back! They’re married and still in love but the hits keep comin’!

Without telling all the secrets, I can tell you that there are: marriages, babies, a shooting, the FBI, and even more – all in this relatively short story!

If you enjoyed book one, you’ll love seeing what these guys have gotten into now, and if you haven’t read book one, this will not make any sense ;)!

I love that the relationship is never in jeopardy, and that with each new dramatic event the two men grow closer. I also loved seeing the more “family” side of Riley. The smexy times are hot! I love how they keep score as to which person’s turn it is to top! Super funny and sexy, too.

I think I enjoyed this even more as an audiobook – Sean Crisden gives this that extra layer of emotion to really draw you into the story. His voices and characterizations are just as good as book one and I think this is the best way to enjoy this series!

…it was a fun listen, fits in well with the series so far, and is a little bit like a bag of chips…you only mean to eat a few, but the next thing you know, you look down and the bag is gone.


I absolutely LOVE Sean's voice for Jack. I listened to this in one sitting, and enjoyed it all. Anyone who loves the series should grab the audio – Sean is wonderful.