Romancing the Rough Diamond is the most recent title in the Romancing The… series and one of the most fun to write. I cheekily call it “Four Palaces and a Farm” because that’s where it all takes place: four of England’s loveliest and most iconic palaces, and as a contrast, the Norfolk farm where Matt’s family works and digs for archaeological treasure. The rocky road to romance for cool executive Joel and talented but prickly designer Matt was such fun to tease out, including some slapstick scenes out on a muddy field, and in the grounds of Buckingham Palace. Plus it was a true joy to be able to write about a gay royal wedding – even if it’s fictional! – because nowadays those things *can* happen.

And the Breaking News??? It’ll be out on audio this month, narrated by the talented Joel Leslie!

What was your inspiration for the Romancing The… series?

I’ve always loved romantic comedies, and the blend of humour, drama, and sexy get-together. It was a treat to do this for a male/male romance! I liked the idea of an enemies-to-lovers plot, dressed up in the glamorous Mayfair world of exclusive jewellery

What other Romancing The… stories have you written?

I have a set of four novels in the same romantic, lighter-hearted vein: Romancing the Wrong Twin with a case of mistaken identity when an identical twin reluctantly steps in on a fake date, Romancing the Ugly Duckling when a flighty city stylist is sent to a remote Scottish island to glam-up a grumpy recluse, and Romancing the Undercover Millionaire when an aimless, rich young man goes undercover in his family’s wine business to find a saboteur. I hope you might enjoy some of these other titles, and they’re all in audio, too.

What is the craziest/weirdest thing you've done in the name of research?

Okay, so this was during Rough Diamond, when I went trawling to find out when the Tower of London last had an official prisoner—it’s in shockingly recent times!—and what their crime was. But you’ll have to read the book to find the answer LOL. 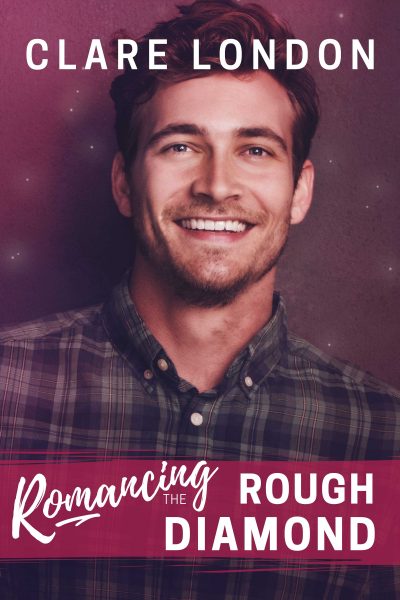 Where trust is the most precious jewel of all.

When Mayfair jewellers Starsmith Stones wins the commission for a British gay royal wedding, CEO Joel Sterling is recommended to the brilliant young designer Matt Barth—only to discover Matt’s the man with whom he shared an anonymous and passionate kiss on the celebration night.

Disenchanted with the commercial jewellery industry, Matt nowadays prefers muddy archaeological digs to designing. Openly resentful of Starsmith’s hostile takeover of his family’s firm, he is horrified at the realisation he’ll be working with the man who engineered that deal—but the opportunity to create something fabulous and unique for the royal couple is too tempting to refuse.

Working as a team reignites the spark between Joel and Matt. But when betrayal from within Starsmith threatens both the project and Joel’s confidence, will they have built enough trust to keep their newfound love as precious as the royal jewels?

**This story offers you a gruff designer who prefers digging for treasure, a smooth CEO who’s too used to his own company, the glamorous Mayfair world of expensive jewellery, enemies to lovers, a gay royal couple who are fond of mischief, and an embarrassing accident on the Buckingham Palace railings!**

Win a free ebook copy of one of the Romancing The… titles (available in all formats) by telling me your favourite RomCom movie!