Today I'd like to welcome V.L. Locey and Stephanie Locey to the blog to celebrate the release of their co-written novel,  Love Is A Walk In The Park.

Tell us why you decided to write together?

VL: Actually, we’ve written together before. Way, way, way back in the day when I was writing Marvel fanfiction, we wrote a pretty funny little series of stories starring Deadpool and Cryptosporidium from the video game Destroy All Humans. I’d just started writing seriously and Steph was maybe thirteen or so and I wager my editors now would faint if they saw that raw work, but we really enjoyed ourselves and always said we’d like to do it again.

SL: When I was a kid, mom would always tell me stories about me as an X-Man. I would get to pick my powers and who I was friends with. It was always really fun, and when 9th grade hit, and I was hormonal and angry all the time, poetry was a good escape for me. I've been wanting to write professionally for a while, and this story idea was a good starting point.

Stephanie what is it like writing with your mom, and what was your first experience like as a writer?

Writing with mom is really interesting, because I've spent years waking up and walking out into the kitchen, watching her focus on her writing, and now, I was a part of it. I know now that I really want to be a writer professionally – both because it's my passion and because I don't want to work shitty retail jobs my whole life. This has been a really eye-opening experience for me, and I'm incredibly grateful to have mom as a guide.

Vicki what is it like writing with your daughter?

It’s been a wonderful experience! She’s so bright and witty, and her writing has grown so much since our Marvel fan fiction days. I love how she’s got such a great insight into her characters and what makes them act as they do. She’s always had a flair for words. Her poetry is amazing! I’m just so incredibly proud of her and the hard work she put into this novel.

Tell us something about your process of writing together? I imagine you both in the office sitting opposite each other and eating a lot of chocolate – am I right?

VL: When we began the book Steph was on summer break from her job and still living at home, so we got about two-thirds of the book done in short order. Then she went back to full time work and that slowed things down a bit. We did have a few days when we were sitting at the same table, laptops open, typing away. I cannot divulge if chocolate and/or Doritos were on the table or not due to familial secrets and such. You understand. winks

SL: I still lived at home while the book was being written, and during summer break, I would wake up and join her at our kitchen table and crank out my chapter. When I went back to work (I work food service at a college, hence my summer being empty), it was very hard to write. After work, I had no energy, and on the weekends, I just wanted to rest. I 100% ate chocolate while I wrote.

Tell us a bit about the story and the inspiration behind it.

VL: The idea actually came about from a discussion we were having with RJ and her lovely daughter Briony when we were in the UK last summer. I’ll let Steph tell the rest as it was really more her and Bri hashing out this nugget of a story idea.

SL: We were driving along some small English suburb when Briony spied a large man with a little Yorkie. She off-handidly mentioned something about how cute a story would be where two guys fell in love at a dog park, and after I asked her if she was going use it, I snatched it up.

Will you be writing a second book together?

VL: I would love to! There’s this idea rolling around my head for a fantasy MM story about a prince and his much older bodyguard…

SL: I'm trying to get mom to write a story about two gamers who meet on an MMO and fall in love irl but I dunno if she's up for it…

Thank you for coming over to the blog! 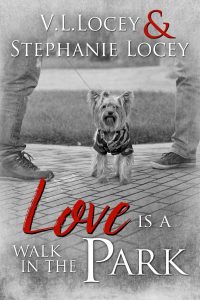 Sullivan Haines knows exactly what he wants out of life. Fame as a Broadway dancer and to find the man of his dreams. Sadly, his love life is a dismal mess, his roommate is PMS personified, and working at a dingy dance studio teaching old people how to tango and foxtrot is not exactly the bright lights. Actually, life in the Big Apple is pretty rotten, until he and his dog run into tall, dark, and oh-so-handsome Duane Hart in the park. Their pooches hit it right off, but can the two men find romance along the park’s winding paths?

Duane Hart hasn’t had a lot go right in his life. His girlfriend recently broke up with him, taking everything that wasn’t nailed down or in his roommate’s name. Well, everything except the Yorkshire terrier that he didn’t want to get in the first place, and that she now refuses to take back. However, when he meets a handsome stranger and his pit bull in the dog park, will the blooming heat in his chest be able to convince him to start dating again? Or will fate prove love isn’t a walk in the park, after all?