Thanks to Charlie Cochrane for taking part in “Suspense Month” and answering some questions. Don't forget to read to the end to enter the giveaway!

What time period are your suspense/mystery stories set?
Several, across three series. My Cambridge Fellows mysteries are set in the early years of the twentieth century, either side of World War 1, whereas the Lindenshaw series is contemporary. (To the point that I’m going to have to include something about the Covid-19 pandemic in the next book!) Then I’ve a few stories set in the early 1950’s that feature my actor laddies, who play Holmes and Watson onscreen and off.

What town/city/country (s) do you work in?
I live between Romsey and Southampton, in Hampshire (old, not New). Quite a change for a London girl like me.

What made you choose the time period you are writing in?
In the case of the early twentieth century, I think it chose me! I’ve always read books from that era – by Conan Doyle, Hornung, Jerome K Jerome, etc – so it felt entirely natural to write a story set then. Then there’s the fact I was born in a house from that era and now live in one that’s slighter newer although still Edwardian, so I can picture the type of rooms ordinary folk would have lived in during that time. And parts of the university I attended – Cambridge – have barely changed at all since then.

How much do you research your time period?
I like to go straight to contemporaneous sources. So, books written in the era, newspapers from the time, films (if available), photos, or people’s own accounts of their lives and events. I’m less happy with reading books/articles/whatever about the era I’m researching because there’s always the risk of bias coming in or a particular period in time being seen with a modern slant which isn’t appropriate.

Do you ever refer to actual historical people?
Yes, but it tends to be at a distance. Somebody talking about meeting whoever it was or reporting what the person had done. An exception would be the odd bit of Cambridge Fellows fanfiction (yes, I’ve fanficced myself) where I’ve included Alan Turing, although he didn’t have a big on page role.
You have to be really careful if you have historical people featured in a story that you’re not being cliched in their actions or dialogue. (“Hello, Mr. Owen. How’s the poetry going?”). You also have to ensure that you’re not forcing the real-life person to do something that’s unconvincing, just because you think it would be great if x had done y. I remember reading a book in which Agatha Christie was blackmailed into doing something ridiculous and found the storyline preposterous. If a real person does something in a story that we know historically they didn’t, that has to pass the “In different circumstances they might have” test.

How do you keep the dialogue of its time?
Partly from drawing on all those books I’ve read that were written then. You get into writing the cadence and style of the dialogue that Jerome or Hornung wrote and then all you have to do is check – and double check – that you haven’t used any anachronistic words, sayings or bits of slang. Oxford English Dictionary online is my friend.

How do your sex scenes reflect the time period?
In one way, quite well, as they tend to be either fade to black or mild, so in keeping with tasteful decorum. But, you know, people have always had sex, both for procreation and pleasure, so the actual act/s is/are no different now than they’ve ever been. Perhaps some of the mental processes around sex are different – autre temps, autre moeurs – with the fear of two men being caught committing an act that was punishable by law. Within my lifetime homosexuality was still illegal.

Are your stories realistic?
As much as any mystery story can be. Let’s face it, given the crime rate in the UK and the fact that multiple killings in small villages or historic cities are actually extremely rare, very little crime fiction set here is in any way realistic in terms of the basic tenet. But I believe readers will suspend that basic disbelief so long as the rest of the setting you depict is like the UK they know and love. So, three people killed in a leafy village by a spinster pretending to be someone else is acceptable whereas one hundred pound notes being used as currency isn’t.

Giveaway!
For your chance to win any book from the Cambridge Fellows series leave a comment below with the answer to this question – Is there a mystery you can read over and over again?

It’s the turn of the century, Queen Victoria’s reign is over, it’s time for a new beginning. In Cambridge, Jonty Stewart takes up a teaching post, acting as a catalyst for change within the archaic institution. But he also has a catalytic effect on Orlando Coppersmith.

Orlando is a brilliant, introverted mathematician with very little experience of life outside the college walls. He strikes up an alliance with the outgoing Jonty, and soon finds himself having feelings he’s never experienced before. Before long their friendship blossoms into more than either man had hoped and they enter into a clandestine relationship.

Yet their romance is complicated when a series of murders is discovered within St. Brides. And all of the victims have one thing in common: a penchant for men. A fact that only puts Orlando and Jonty in greater danger, when they are enlisted to act as the eyes and ears for the police…

Lessons in Love is the first book in the gripping Cambridge Fellows series by Charlie Cochrane. Set in Edwardian England, it explores engrossing mysteries and heartfelt gay romances, all set in the historical walls of Cambridge University. 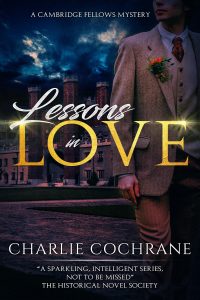