It's Wednesday, it's Hump Day, time for another author to take their turn in the hot seat. Welcome Roberta Blablanski!

Do you ever abandon a draft partly written and just move on?

I do have a few drafts I’ve abandoned for other projects. I go where inspiration (and the voices in my head) leads me, and sometimes that means putting one project aside to focus on another. I have all the best intentions to return to the abandoned projects, but we’ll just have to see what actually happens.

I like to take a break to give myself a breather and read a book from my TBR list. I find this clears my head and gives be a better perspective for editing and revising.

What was the hardest thing about writing your latest book?

The hardest thing about writing Addiction was writing a character who is an addict and has done some unsavory things, but still keeping the character relatable and making the reader root for him. Another hard part was writing the subject matter treated respectfully while being honest about the harsh realities of addiction.

My favorite childhood book is a tie between Pierre: A Cautionary Tale in Five Chapters and a Prologue and Morris the Moose Goes to School. I would read one or both every night. The original books from my childhood are pretty worse for wear given the number of times I read them.

What book/s are you reading at the moment?

Right now, I am beta reading a phenomenal draft of this epic, apocalyptic novel that features anthropomorphic plants. The world building is amazing and nothing like I’ve ever read. I’m looking forward to seeing it published.

For your chance to win an ebook of Addiction answer this question, what is your favourite childhood book?

Don't forget to check back next week to see if you're a winner. 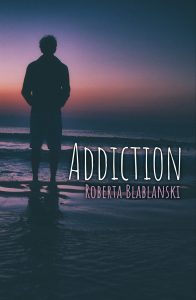 Addiction can destroy your life. But if you destroy addiction, can you get your life back?

At twenty-eight, Owen Fredrikson is homeless, unemployed, and grappling with drug addiction. Before he let drugs take over his life, he had a pretty sweet job working the front desk of a fancy hotel, his boss was his best friend, and he had a loving fiancé.

When tragedy befalls Owen and Dex is called to his side, Owen has some tough decisions to make. Both men must determine how far they are willing to go to rebuild the life they once shared.

Can Owen conquer his addiction while facing his demons? And can Dex open his heart and trust Owen again?

Roberta Blablanski hails from The Big Easy: New Orleans, Louisiana. She draws inspiration from her colorful hometown and her former life as a college radio DJ. When she isn’t writing, she spends her days searching for the world’s best Bloody Mary and avoiding people she went to high school with. Her normal habitat is curled up in bed with a good book and a cup of coffee.

Roberta developed a love of books at an early age, spending her summers at the library. Years later, after watching the American version of the television show Queer as Folk, she began searching for books featuring queer characters finding love. Most recently, she began writing queer love stories of her own, drawing from her own personal experiences and creating characters and story lines as vibrant as her ever-changing hair color.