It's Nell Iris' turn in the Hump Day Hot Seat…

Hi! I’m Nell Iris and I was very honored to be asked to be a guest here today. Thank you so much for having me! <3

I just finished reading the Men of Lancaster County series by Eli Easton. I re-read A Second Harvest on Sunday and finished Tender Mercies today. I’m a big fan of Eli Easton’s writing, and I love characters that are different. You know, something else than the big, gruff alpha male. And both books have characters just like that, for example Samuel, the Amish guy with a club foot in Tender Mercies, who’s not very educated and really shy but still smart and determined and nothing like you’d think. He’s such a great character and I adore him. I really hope Ms. Easton will write more books about the men of Lancaster County.

I’m from Sweden, so anything Astrid Lindgren? I loved Pippi Longstocking, but my absolute favorite was Ronia the Robber’s Daughter and I read it a gazillion times. I also loved Anne of Green Gables and I wanted a bosom friend like Anne had in Diana. So basically, I loved any book with a strong, stubborn female character, I guess.

Star Trek!! When I met my husband 25 years or so ago, he introduced me to Star Trek and it was love at first sight. I’ve watched everything (series and movies) lots of times, but I never grow tired of them. And yes, I even like the new Discovery. (It took me a while to get used to the new Klingon look, but now I’m on board!) I love the shows so much because the writers take subjects that are current and important but adapt them to space and make it work. Like for example, one of my favorite episodes The Drumhead (ST:TNG) is about racism in an alien setting. It’s very believable and poignant and the slow build from somewhat hidden antagonism to full-blown racism in the end of the episode feels very real and hits me right in the heart every time.

To actually sit down and write. I suffer from a severe case of procrastination and always find something else to do instead of writing (I’m looking at you, YouTube!) But I work really well under pressure and I need a deadline, which is why submission calls work great for me. Then someone else takes charge and tells me Nell, be done by this date or else… and that lights a fire under my behind and gets me going.

Oh, and writing blurbs. Blurbs are more difficult than writing the actual book! (Not kidding!)

Yes! There’s a small side character in my book Cinnamon Eyes, Benji the Twinktender, who also shows up in my upcoming book Promise Me We’ll Be Okay. He plays a bigger part in PMWBO than in CE—and even sneaks a kiss from MC Jude—but he isn’t one of the MCs. But he’s turning out to be a fun character (but maybe not as fun as one of his dads?) so he’s getting his own story…someday. Not to far into the future!

And I guess this is the perfect place to promote my upcoming release Promise Me We’ll Be Okay. It will be released on March 3rd by JMS Books, and it takes place in the same universe as Cinnamon Eyes like I already mentioned. Except for Benji the Twinktender, Asher (one of the MCs in CE) has a tiny cameo, but both MCs are new, neither of them was in CE.
It’s an emotional story about Jude (a high-school music teacher) and Vincent (a hot-shot lawyer), second chances, forgiveness, and music. Music plays a very important part in this story.

For your chance to win an ebook of Cinnamon Eyes, answer this question…how many unread books do you have on your ereader?

Promise Me We'll Be Okay – Out March 3

What do you do when your past comes knocking?

Six hundred and ninety-five days. That’s how long it’s been since Jude’s fiancé broke off their engagement. With the help of his brother and his all-encompassing love for music, Jude glued the broken pieces of his heart back together, but when his ex shows up on his doorstep late one evening, Jude fears it will fall apart again.

Two years ago, Vincent made a terrible mistake. He left the love of his life for stupid, ill-advised reasons. It took a traumatic event to bring what was truly important in his life into focus. Older and wiser, he’s now ready to do whatever it takes to win Jude back.

Their chemistry is as explosive as ever, but will they be able to work through the real issues? Can trust once broken be rebuilt? 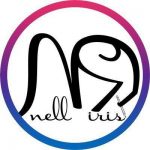 Nell Iris is a romantic at heart who believes everyone deserves a happy ending, believes passionately in equality for all regardless of race, gender or sexuality, and wants to make the world a better, less hateful, place.

Nell is a 40-something bisexual Swedish living in Malaysia, where she spends her days writing, surfing the Internet, enjoying the heat, and eating good food.

The Road To Frosty Hollow