It's Wednesday, it's Hump Day, it's A.M Arthur's turn in the Hot Seat.

Oh yes, I abandon partially-written drafts and have many times. Story ideas come all the time and from all over the place. Sometimes when an idea is shiny and new, I’ll sit down and write whatever comes to me, but I don’t always know where the idea is going. About two years ago, I began drafting what I originally planned to be the fourth book in my Perspectives series. I wrote a chapter and a half, and then I stalled. I had no idea where to go, but I liked the characters, so I filed it away and wrote other things. Then in late 2016, a reader made a comment about a connected character, and a lightbulb went off! This character needed to be in that abandoned book, and suddenly I had the story. It became HERE FOR US (Us #1). Sometimes a book isn’t abandoned, it’s simply not ready to be told. And I absolutely keep a file of plot ideas. If I don’t write it down, I’m sure to forget, and you never know when an old idea will make a new book better.

I absolutely think cover art is important when it comes to buying books. Generally, the cover is a reader’s first interaction with the book. The first thumbnail they see on Amazon, or what catches their eye on the bookshelf at Barnes & Noble. One of the hardest lines to straddle sometimes is what sort of cover will market the book versus the cover the author thinks will best represent the book’s content, and sometimes—especially with traditional publishers—the two don’t always jibe. I’ve been unhappy by publisher-created covers in the past, because our expectations didn’t meet; I’ve also had some amazing cover art done by publishers that I adore to pieces. And as I’ve been self-publishing more these past sixteen months or so, I’ve had fun working directly with cover artists for my various series like Us and Breaking Free, giving each series a unique look that I hope appeals to readers.

I do a little bit of both. When I start a new book, I always have to get to know my two heroes. Their pasts, their goals, the things that drive them and scare them the most. What do they have to lose? Once I know those things, I can start to figure out their story, how they intertwine, and give them obstacles to their happily ever after. Once in a while, I have a book plotted out basically from start to finish. I did that last summer with SEEN (Breaking Free #2). I just knew exactly how that book was going to go. Conversely, when I wrote ROPED IN (Clean Slate Ranch #2), I only had a few basic plot points I knew I needed to hit, but a lot of the book just sort of came as I wrote it.

Probably Bridge To Terabithia. It’s definitely a book I read as a child that has stuck with me for a long, long time. It had an ending I simply didn’t expect and as a kid of maybe nine or ten, it’s shocking and upsetting. I’ve never re-read it as an adult, because there are some books whose magic just sticks with you, and you don’t want to risk losing it.

My sister’s birthday was a few weeks ago. I baked her a cake, and I gave her a hardback book she wanted, as well as a gift card. We’re both in our late thirties, and when birthdays roll around, we now ask, “What specifically do you want?” At this point, neither of us wants more clutter, so we make sure we buy gifts the other person absolutely wants.

For your chance to win His Faith As He Finds It (Perspectives #5) answer this question….what was the last give you gave someone? 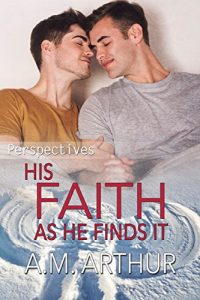 His Faith As He Finds It (Perspectives #5) – OUT NOW

In-home nurse Vinson Larrazzo is always up for a challenge. He definitely finds one in the rude Gerard Fowler—and Gerard’s shockingly gorgeous nephew Rick, who is just as grumpy. And since Vinson’s first priority is always his patient, he ignores his strong—and highly unprofessional—feelings for Rick.

But their chemistry is undeniable, and a snowstorm gives them get the perfect chance to explore it. Vinson has faith they can make it work, but to have a future together, Rick needs to find enough faith in himself to own his mistakes and let go of the past—even if that means confronting his uncle about an incident that put Rick on his dangerous, damaging road to addiction. And the fallout of those secrets might be more than Rick’s relationship with Vinson can bear.

Note: This 74,000-word novel is part of the ongoing “Perspectives” series, but it can be read as a standalone.

A.M. Arthur was born and raised in the same kind of small town that she likes to write about, a stone's throw from both beach resorts and generational farmland.  She's been creating stories in her head since she was a child and scribbling them down nearly as long, in a losing battle to make the fictional voices stop.  She credits an early fascination with male friendships (bromance hadn't been coined yet back then) with her later discovery of and subsequent love affair with m/m romance stories. A.M. Arthur's work is available from Carina Press, Dreamspinner Press, SMP Swerve, and Briggs-King Books.

When not exorcising the voices in her head, she toils away in a retail job that tests her patience and gives her lots of story fodder.  She can also be found in her kitchen, pretending she's an amateur chef and trying to not poison herself or others with her cuisine experiments.

Contact her at am_arthur@yahoo.com with your cooking tips (or book comments). You can also find her online (http://amarthur.blogspot.com/), as well as on Twitter (http://twitter.com/am_arthur), Tumblr (http://www.tumblr.com/blog/am-arthur), and Facebook (https://www.facebook.com/A.M.Arthur.M.A ). For updates, info and the occasional freebie, sign up for her free newsletter: https://vr2.verticalresponse.com/s/signupformynewsletter16492674416904