Another Wednesday and another Hump Day interview, this week it's Jordan L Hawk taking the hot seat…

What part of a new story comes to you first? Characters? Plot? A scene? A theme? Or does it vary from book to book?

Characters, always. I have to want to find out more about this person, about what their story is, just to get started. Writing from just an idea is a non-starter for me; I have to at least see and be intrigued by one of the MCs as well.
As for plot, I find plot comes from character. If you know the characters well enough, you know what they will do—or have done. Everything should unfold naturally from there.

I always plot. Pantsing inevitably ends up in disaster for me. If I don’t have an outline, I tend to either not push forward and the books stalls, or else go down the wrong path and end up scrapping 20,000 words.

Right now I’m really enjoying Lucifer because it’s funny but also very well written. The character development has been phenomenal. I also adore Steven Universe, which has the most mature depiction of guilt and grieving I’ve ever seen on television, even though it’s a kids’ show.

Probably The Lord of the Rings. I remember being in middle school and sobbing my eyes out over the scene on the side of Mount Doom, after the ring is destroyed, when Sam and Frodo are holding hands and preparing for death. And then sobbing again when Frodo leaves Sam at the Grey Havens.

I just finished Silent Child by Sarah A. Denzil and have just started on The Well by Marie Sexton.

For your chance to win a backlist ebook from Jordan answer this question, what's your favourite TV show and why? 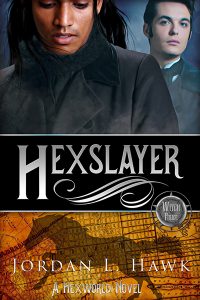 Horse shifter Nick has one rule: never trust a witch.

Nick has devoted his life to making his saloon a safe haven for the feral familiars of New York. So when a brutal killer slaughters a feral under his protection, Nick has no choice but to try and catch the murderer. Even if that means bonding with a handsome Irish witch.

Officer Jamie MacDougal came back from the war in Cuba missing part of a leg and most of his heart. After his former lover becomes one of the killer’s victims, Jamie will do anything to solve the case.

Nick comes to Jamie with a proposal: after making a temporary bond, they will work together to stop the murders. Once the killer is caught, they walk away and never see one another again.

It sounds simple enough. But the passion that flares between the two men won’t be so easily extinguished. And if Nick can’t learn to trust his witch, he stands to lose everything—including his life.

Jordan L. Hawk grew up in North Carolina and forgot to ever leave. Childhood tales of mountain ghosts and mysterious creatures gave her a life-long love of things that go bump in the night. When she isn’t writing, she brews her own beer and tries to keep her cats from destroying the house. Her best-selling Whyborne & Griffin series (beginning with Widdershins) can be found in print, ebook, and audiobook at Amazon and other online retailers.

Action Adventure, Diane Adams, eBook, In The Shadow Of The Wolf, Paranormal

Splintered Lies (Shadow Of The Wolf Book 3) with Diane Adams