It's Hump Day, time for another interview and this week it's Sam Burns's turn in the hot seat.  Welcome Sam…

It depends on the day. Usually it energizes. I love when a story starts to come together, and I’ve been known to stay up all night if I’m close to finishing something—it has that same energy as the feeling that you just can’t go to bed till you finish reading a book.

I confess to having one half of a semi-autobiographical novel that will never see the light of day, but I’m not usually one to sit on a manuscript if it can be fixed. Other than that, I have three projects I’m currently writing on, one with Waverly and the others solo.

Getting started. Outlining and writing that first five thousand words is the slowest, most energy-consuming part of a project. One I get past that, the story starts to flow.

Oh yes! I know everyone says don’t judge a book by its cover, but we all do it, don’t we? There are a ton of books out there, and an eye-catching cover is an important part of attracting a reader. Yeah, even me when I’m buying. I’ll buy a book with a bad cover if it comes highly recommended, but if I’m just surfing Amazon? I’m a sucker for a pretty piece of art.

I always do an initial edit right after finishing . . . and then another one some time later. Having a little distance can help, but it’s always going to be my writing, so there will always be things I miss. That’s why outside editing is so important.

Is super-health an option? That’d be nice. I pulled a muscle sneezing a few months ago, and never doing that again would be ideal.

Tough one. I’m actually a pretty big TV fan. The first five or six seasons of Supernatural are excellent. On the absolute opposite side of the spectrum, I love old-school Red Dwarf.

Murder House by Jordan Castillo Price; Psycop is one of my favorite series.

Ha! That’s like asking what my favorite day ever was. I read thousands of books as a kid, and most of them probably not age-appropriate. I remember being a huge fan of A Wrinkle in Time for a while.

A genie grants you three tiny wishes, what are they?

Oh I’m bad at these, but tiny is a good qualifier. Um, an audio version of Patron of Mercy, since it’s my favorite ever. (I know, not so tiny) No more upper respiratory infection like the annoying one I have right now. And, um… a fresh cup of tea would be nice!

For your chance to win a backlist ebook from Sam Burns answer this question…What book are you reading at the moment? Leave a comment below and check back in a week to see if you’ve won!

Winner of last week's giveaway was Kendra Patterson, drop Rachel a line at rjscott.team@gmail.com for your prize. 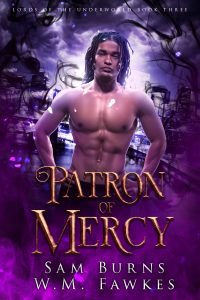 Lach has spent the last few thousand years counting only on himself. What he needed, he took. What he wanted, he won with charm. All except a god he turned his back on an age ago, when he had a different name and didn’t know what he was giving up.

Thanatos, god of merciful death, is one of the gentlest gods in the pantheon—easing the transition between life and death for billions of mortals. But he has faced eternity alone. After breaking his heart on the sharp words of a fisherman’s son, he hasn’t been able to connect with anyone.

Now, Lach is crashing back into Thanatos’s life, dragging him into an adventure that could save the world . . . or kill them both.

Sam wrote her first fantasy epic with her best friend when she was ten. Like almost any epic fiction written by a ten year old, it was awful. She likes to think she’s improved since then, if only because she has better handwriting now.

If she’s not writing, she’s almost certainly either reading or lost down a Wikipedia rabbit hole while pretending to research for a novel.