It's Wednesday, it's Hump Day, it's time for another hump day interview. This week is the writing duo, K.A Merikan's turn in the hot seat!

Agnes: I can’t pick just one, but I do get into those phases when I keep thinking and talking about a particular character. At his moment it’s Drake, one of the MCs of our gay harem series, Four Mercenaries. What can I say? I love brooding types with long hair and sexy, wiry bodies. Past trauma and lots of angst is a bonus. Drake has been through a terrible ordeal and finds it extremely hard to trust people, but when he gradually falls in love with Clover in Their Bounty, the soft inside he protects with a tough exterior starts showing. There is an endearing innocence deep within that man, and when he trusts enough to let it show, it’s really beautiful.

Kat: Since we’re speaking of the Four Mercenaries hero, my latest book boyfriend is Tank, the Daddy of the group. Strong, competent, and keeps everyone together even at the darkest times. Team Tank!

How long on average does it take you to write a book?

Agnes: It depends on the length and how much research or worldbuilding is needed, but when we don’t have to travel much, writing a novel takes us a few weeks on average. Though there are exceptions from this rule. Last month, we were really pumped about a spontaneous project and desperately wanted to finish the rough draft before my vacation, because a long break would obviously affect our momentum of that novel. As a result, we followed an insane schedule of writing from 8 am to 11pm with short breaks for meals and sports only. The work left me exhausted but we finished the draft version in just under two weeks. Not in a hurry to do that again, haha.

How do you select the names of your characters?

We believe it’s a good idea to choose names that evoke certain associations. Gentler characters will have softer-sounding names, whereas a harsher name will work better for an MC, who’s more rough around the edges. We consider what the name is supposed to communicate. What social group does the character belong to? What kind of person is he? To find fitting names, we often look through lists of names and pick ones that feel right, but sometimes, a character starts with a name and has other qualities added during the development of the story. I’ll use Loki from “Red Hot” as an example. The basic idea for this character was ‘a dangerous, chaotic twink’. Loki is the name of the Norse god of mischief, as well as the name of a popular Marvel character who also embodies those qualities. And since the name has a nice sound to it, we decided on it very fast.

We also use a lot of nicknames, and try to make them something that other people around them would call the person because of a story, their looks, or their profession. For example Tooth from The Devil’s Ride is called that way because he pulls people’s teeth as torture. As a joke, his friends started calling him ‘Tooth Fairy’, and then that got shortened to ‘Tooth’.

We do. Our notes are focused on what informs their actions, the kind of language they use, and the important relationships in their lives, as well as the little things like their favorite smells or their eye color. Most of all, though, we tend to be immersed in the heads of the MCs as we write, so keeping them consistent comes naturally.

Agnes: I’m in an orc phase because of a series of books we’re planning for next year, so I recently picked up The Grey Bastards by Jonathan French. It’s a fantasy novel focused on a group of half-orcs, and it’s fantastically immersive, with rich worldbuilding, many twists, and realistic character psychology. Can’t wait for the sequel.

Kat: To be fair, I was the one to recommend that book ;D

Agnes: We have many inner jokes, many of them related to random conversations about our books. In our first full-length novel, Special Needs, one of the MCs is goat-phobic, so naturally we keep sending one another weird goat-themed movie clips and photos to this day. I decided to one-up Kat recently and got her a bleating goat figurine. We switch on the sound when we want to jokingly protest something the other does.

For your chance to win a backlist ebook from K.A. Merikan, answer this question…what are you reading at the moment? Leave a comment below and check back next week to see if you’ve won! 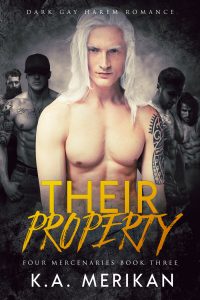 Clover’s life was perfect a year ago. He’d found four men to love, each essential to making him whole. Each one of them tough in their own way, part of a crew of mercenaries living on the wrong side of the law.

Tank was his loving Daddy, Pyro the wild one always pulling him into mischief, Boar taught him how to cook, and Drake showed him how to use knives in a wholly different fashion.

All Clover wanted was to finally be an equal in the group. So he trained, he pushed, and risked, but when real danger stared him in the face, he broke like a twig.

Now, with one of his lovers taken, Clover can’t find a way back to his former self. Each of the relationships they’d so meticulously built is fractured, and might never be the same.

If their group is to ever be whole again, Clover needs to find the courage he’s lost, but that means facing the monster who scarred him, and truths none of his men want to confront.

K.A. Merikan are a team of writers who try not to suck at adulting, with some success. Always eager to explore the murky waters of the weird and wonderful, K.A. Merikan don’t follow fixed formulas and want each of their books to be a surprise for those who choose to hop on for the ride.

K.A. Merikan have a few sweeter M/M romances as well, but they specialize in the dark, dirty, and dangerous side of M/M, full of bikers, bad boys, mafiosi, and scorching hot romance.