It's Wednesday, it's Hump Day and today's author in the hot seat is A.E. Via.

What's your favorite TV Show and why?

My all-time favorite television show has always been and probably forever will be the Golden Girls. I of course know pretty much every single episode in Season One by heart, but its a show I watch every single day. Unfortunately I can't watch it while I'm writing of course, so my television stays on CNN if I'm working.

I'm a reader before I'm a writer. Always will be. I scour the best-seller's list constantly for new releases, especially from my favorite auto-buys. Right now I'm currently reading Eden Finley's latest installment in the Steele Brother's series. Its super hot and I love it. Eden was even considerate enough to come to my alpha fan group and talk about it this past weekend! I just adore her and wish her much success with this one and all the rest!

We all have junk. List the items in your fridge you never use.

Ugh. Those nasty-ass-freaking homemade pickled cucumbers my sister's mother-n-law keeps giving me ‘fresh from her garden'. Geez. But, I'm scared to throw them away because I'll never know if she'll popup over my house with my sister and ask for some. ?
Other than that, I clean my refrigerator weekly.

What do you look for when picking a narrator?

This is a hard truth for me to admit. But because I don't like audio books, I have a narrator beta team that listens to my narrator auditions. I have such a hard time with that task because for months and months, sometimes even years, I've heard that particular character's voice in my head, so it's difficult for me to hear it in any other way and I over-critique. However, my team does a great job. I'm always stressing them to look for range, individuality and a deep, throaty sound.
Often times I don't hear the narrator's voice until he's finished the book. And thankfully, my team has never once let me down. Aiden Snow and Nathaniel Black have been two amazing choices they made all their own. And, yes, I listen to at least 80% of the completed work.

That's a funny question. I have a huge stack of giveaways about to go out the door today! I love giving my readers gifts, love letters, trinkets, tokens of appreciation, all the time. Weekly!! And I know it's hard for authors to do it all, writing, promoting, and tending to their readership, but its so rewarding and fulfilling when you're not only giving the readers your best but also showing how much their support means to you. I do it constantly. So much where I forget about working and end up playing games and giveaways all day with my fan group. They're a lively bunch of alphas… you should definitely join us for some mature fun. We have surprise pop-up guests. Random flash-giveaways, and most importantly, unique, well-thought out gifts.
A.E.'s Alpha Team https://bit.ly/2Ku4jAx

For your chance to win an audio code for Nothing Special, answer this question…what was the last gift you gave someone? Leave a comment below and check back next week to see if you've won! 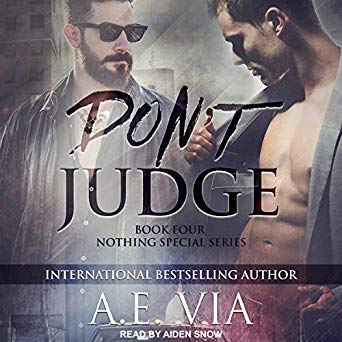 Detective Austin Michaels didn't think life could get any better after he was accepted into the most notorious narcotics task force on the East Coast, headed up by two of the baddest Lieutenants with the Atlanta Police Department – Cashel Godfrey and Leonidis Day.

Michaels knew he would fit right in as the team's sniper, having received his fair share of commendations for marksmanship. He was just as badass as the rest of the twenty brothers that made up their team. But when Michaels lets their prime suspect get away from a huge bust with over a quarter of a million dollars in drugs, he's willing to do whatever it takes to make it right.

Left with no other options, God chooses to bring in outside help, calling on his long-time friend and bounty hunter, Judge Josephson.

Judge was considered one of the best trackers during his enlistment in the United States Marine Corps. After retiring, he used those skills to become one of the most sought out fugitive trackers in the country. When Judge gets a call from his old friend needing his help, he quickly tells God, yes.

A.E. Via has been a best-selling author in the beautiful gay romance genre for five years now, but she’s no stranger to MM. She’s been an avid reader of gay lit for over fifteen years before she picked up her laptop to place her own kiss on this genre. She’s also the founder and owner of Via Star Wings Books, having published a couple great new up and coming MM authors.

A.E. has a Bachelor of Arts in Criminal Justice from Virginia Wesleyan College that she used to start her own paralegal firm after she graduated in 2008. She spent five years preparing and filing bankruptcy petitions for struggling blue collar workers who couldn’t afford to file with a lawyer. It was a rewarding and satisfying career… but another path called to her. Writing.

A.E.’s writing embodies everything from hopelessly romantic to adventure, to scandalous. Her stories often include intriguing edges and twists that take readers to new, thought-provoking depths.

Now that she’s gotten over her 10 books published hump, she’s kind of known now for her hardcore, play rough and love hard, bad boy, alphas. However, she does like to push herself to step out of her comfort zone, exploring different tropes, but she won’t push herself into a whole other genre. She’s head over heels for gay romance and she has tons of more hot stories to tell.

Be sure to visit Adrienne on her social media pages and subscribe to her newsletter to never miss another release date! Go to A.E. Via’s official website http://authoraevia.com for more detailed information on how to contact her, follow her, or a sneak peak at upcoming work, free reads, VSWB submissions, and where she’ll appear next.

Audio, It's All About The Audio, Paranormal