It's Wednesday, time for a Hump Day Interview! Today I'd like to welcome the fabulous writing duo, Ari McKay.

What one story made you lose sleep as a kid?

McKay: When I was a kid, I love reading anthologies of ghost/horror stories. I checked out as many as I could find in the children’s library, and I bought them and received them as presents as well because apparently I loved torturing myself and my family knew and enabled it. One story in particular that stayed with me and made me lose sleep comes from the Alfred Hitchcock’s Supernatural Tales of Terror and Suspense anthology (which I still have!). The story is “The Quest for ‘Blank Claveringi’” by Patricia Highsmith, and it’s about a zoologist who seeks out—and unfortunately, finds—an island filled with giant carnivorous snails. You wouldn’t think snails are all that scary, but it’s the last line of the story that lingered: “he realized as the thousands of pairs of teeth began to gnaw at his back, that his fate was both to drown and to be chewed to death.”

McKay: I’ve been on a nonfiction kick this summer, and currently I’m reading two very different nonfiction books. The first is Wishful Drinking, by Carrie Fisher because I adore her fierce honesty, and I’m still sad she’s gone. The second is Wordslut: A Feminist Guide to Taking Back the English Language, by Amanda Montell, which has blown my mind multiple times on multiple levels and which I’m now recommending to every female-identifying person I know.

McKay: Um. Lots? Double digits, certainly. The most common reason is that the book isn’t working for some reason, so we put it aside to let it marinate while we try to figure out what’s not working and why. Sometimes we figure it out and go back to finish the book, but sometimes, we don’t. We’ve also put aside books because we got distracted by a shiny new idea. Occasionally, we put a book aside because we get bored with it or end up not liking the idea as much as we thought we would. We don’t think any writing is wasted, however. Sometimes we scavenge from abandoned drafts for material for our current book, so things get recycled. But even if the unfinished draft just sits there and collects dust, it was good practice.

Ari: Oh, boy, I LOVE this question! I would have to say Edgar Allan Poe, because he’s still my first love for all things poetry; HP Lovecraft — yes, I understand his politics aren’t something I want to get into, but his WORLD… I want to know exactly what inspired him to the horrors he created; Nikola Tesla, because he had possibly the most fascinating scientific mind since Leonardo Da Vinci; Queen Elizabeth I, because I want to know why she, as the most powerful female monarch of her day, decided to never marry or have children; and Freddie Mercury, because I have always admired him and would love to get the opportunity to talk to him about his musical legacy.

Ari: Time travel! Questions about what was and what will be have always fascinated me, so I’d love to be able to go forwards and backwards and have all my questions answered!

For your chance to win a backlist ebook from Ari McKay answer this question…if you could have a superpower, what would it be and why? Leave a comment  below and check back in a week to see if you've won! 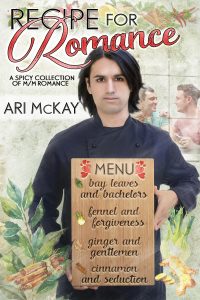 Welcome to Montgomery House, Charleston’s finest restaurant. When you walk in the front doors of the stately former mansion, you’ll be surrounded by true Southern charm. Owner Rhys Montgomery will personally welcome you, while the tantalizing scents of Executive Chef Stephen Pierce’s latest culinary masterpiece linger in the air. Enjoy a walk in the gardens or an elegant meal in the dining room, as you watch the love stories play out around you…

Bay Leaves and Bachelors, Fennel and Forgiveness , Ginger and Gentlemen & Cinnamon and Seduction

Ari McKay is the professional pseudonym for Arionrhod and McKay, who have been writing together for over a decade. Their collaborations encompass a wide variety of romance genres, including contemporary, fantasy, science fiction, gothic, and action/adventure. Their work includes the Blood Bathory series of paranormal novels, the Herc’s Mercs series, as well as two historical Westerns: Heart of Stone and Finding Forgiveness. When not writing, they can often be found scheming over costume designs or binge watching TV shows together.

Arionrhod is a systems engineer by day who is eagerly looking forward to (hopefully) becoming a full time writer in the not-too-distant future. Now that she is an empty-nester, she has turned her attentions to finding the perfect piece of land to build a fortress in preparation for the zombie apocalypse, and baking (and eating) far too many cakes.

McKay is an English teacher who has been writing for one reason or another most of her life. She also enjoys knitting, reading, cooking, and playing video games. She has been known to knit in public. Given she has the survival skills of a gnat, she’s relying on Arionrhod to help her survive the zombie apocalypse.